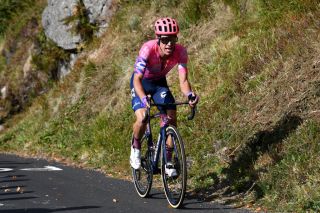 Rigoberto Urán (EF Pro Cycling) has been quietly and consistently putting in podium-like performances in this year's Tour de France and is currently sitting in third overall at 1:34 down on the yellow jersey with five days of racing left to go.

Urán was on the right side of the split on stage 7 when the race was hit by crosswinds and he's also raced well in the high mountains, never right at the front of the race, but never conceding more than a handful of seconds in the uphill sprints to the line.

"Rigo is going well and he's come a long way from his Vuelta crash from last year. He's stepped back up to becoming the leader," Urán's directeur sportif, Tom Southam told Cyclingnews.

"We turned up here with him, Dani Martínez and Sergio Higuita and one way or another he's at the top of the pile. That's great because he's a leader that we're accustomed to riding for, and we know how he works, and how he operates."

Wegelius: Still many unanswered questions in this Tour de France

Vaughters: Urán is the godfather in our Tour de France team

Wednesday's Stage 17 of the race hits the high mountains once more with two HC climbs,  as the race stretches into high altitude territory, including the brutally tough summit finish at the Col de la Loze at 2302 metres.

Urán, who has three Grand Tour second places to his name, has more experience than most of his fellow top 10 rivals, and Southam believes that if the Colombian's legs are good enough he could also surprise in the all-important time trial on stage 20.

"We go to high altitude, which is in his favour, but everyone is riding the same race now because you're either close and in the mix or a long way away," he said.

"I think that that the TT also suits Rigoberto better than some of the guys around him or behind him on GC. The Tour seems to be hanging in the balance and has been for ages but then all of a sudden, at some point in the mountains, it's going to be over. It could be as soon as stage 17.

"Rigo has his style of racing and that's taken him a long way. He reads it in the moment and if he sees an opportunity he's not going to hesitate. We don't need to over-complicate things with him."

The difference, Southam says, when comparing the tough Alpine stages that lie ahead with what the Tour has already endured in the Pyrenees and the Jura mountain ranges, is that the style of racing will change over the coming days.

The punchy finishes that have seen stages decided by bonus seconds or late splits caused by Primož Roglič or Tadej Pogačar, will be replaced by longer efforts towards the more difficult part of a three-week race.

"Earlier on in the race I thought that Jumbo-Visma would be more tired by now but they didn't have to do that much in the second week because of the green jersey competition and they're actually as strong as ever.

"But I'm not sure that UAE have the depth or the riders than to do more than sprint for the win but on a longer, high altitude climb, things will go away from those punchy finishes. There's still quite a bit of road to come."