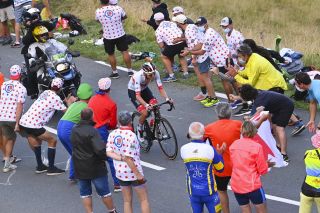 After losing 81 seconds on Friday’s echelon stage, Tadej Pogačar (UAE Team Emirates) promised that he would return to the fray on Saturday in the Pyrenees of the Tour de France, and the young Slovenian was as good as his word.

The Slovenian was the only general classification contender able to go clear on the Peyresourde, with the shadow-boxing between the other top favourites effectively neutralising each other’s moves.

A first attack was closed down by Primož Roglič (Jumbo-Visma), with Nairo Quintana (Arkea-Samsic) quickly charging across. But after Roglič sat up and the favourites regrouped, a second attack by Pogačar met with notably less opposition.

At one point Pogačar was a minute ahead of the GC group, and for a moment it briefly looked as if Roglič’s seemingly ambivalent attitude towards taking the yellow - for now, at least - would allow another Slovenian into the lead, similar to last year's podium at the Vuelta a España.

Various drives by other GC candidates like Quintana, Romain Bardet (AG2R La Mondiale) and Guillaume Martin (Cofidis Solutions Credits) cut into Pogačar’s lead and a counter-attack by Mikel Landa (Bahrain-McLaren) and Richie Porte (Trek-Segafredo) inflicted far less damage than might have been expected.

Instead, after his white-clad figure had stormed over the summit of the final first category climb of the stage, then sped down the fast, not excessively difficult descent and across the line, Pogačar was still 40 seconds ahead of the main group of favourites.

Held up by a crash in the finale of yesterday’s echelon-filled stage and forced into the second group behind the main GC contenders, Pogačar this time was able to take advantage of his rivals’ hesitation. Of all the top names in the Tour’s first day in the Pyrenees, Pogačar - whose first Grand Tour was in the Vuelta last year - clearly benefited the most, and impressed the most.

“I saw that the other guys were looking at each other and everyone was on the limit,” Pogačar said afterwards. “I had the chance to attack and I went full gas for the last five kilometres to the top.

“On the downhill, I tried to go as deep as I could and at the end of it all, I had a 40 second advantage, so that was a good day for me. Tomorrow will be difficult as well, so we will see how we take each stage on the day by day.”

Pogačar has also closed the gap on Egan Bernal (Ineos-Grenadies) at the top of the Best Young Rider’s classification, which he led earlier last week, to 35 seconds. But it remains to be seen if wearing white in Paris is the limit to his ambitions, and for now his debut in the Tour de France could not be going better.