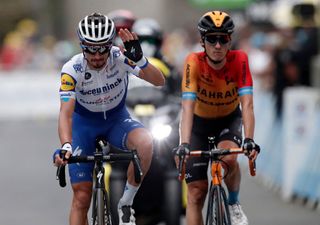 The first Pyrenean stage of the 2020 Tour de France saw a number of dramatic changes on GC with several potential contenders losing time. The main casualties were Thibaut Pinot (Groupama-FDJ) and Deceuninck-QuickStep's Julian Alaphilippe. The FDJ leader was dropped on the second climb of the day, the Port de Balès, and quickly lost ground as Jumbo-Visma set a steady but still bearable pace on the front of the peloton with 41km to go.

Alaphilippe was more than good enough to hang on and the Frenchman, who started the day just 15 seconds off Adam Yates' yellow jersey was present and accounted for when a reduced peloton hit the lower slopes of the final climb of the Col de Peyresourde.

In fact, Alaphilippe even managed to put in a huge attack that split what was left of the maillot jaune group, but once caught, he quickly cracked and ended up losing 18:07 to stage winner Nans Peters of AG2R La Mondiale.

Although Alaphilippe came into the Tour stating that his ambitions revolved around stage wins it was still a surprise to see him lose so much time, and after just one stage in the Pyrenees he has fallen from 11th to 26th overall, over 11 minutes down on yellow.

At the top of the standings, Adam Yates (Mitchelton-Scott) hung onto yellow after some valiant riding on the Peyresourde. He was dropped several times by his rivals but fought back each time and retains his slim three-second lead over Jumbo-Visma leader Primož Roglič.

The Slovenian was the virtual GC leader on the road at one point when he attacked with Nairo Quintana (Arkéa-Samsic) and Tadej Pogačar (UAE Team Emiraes) but the trio were caught after Rigoberto Urán (EF Pro Cycling) upped the pace from the chase group.

Romain Bardet managed to make the day even better for AG2R La Mondiale with a late attack that netted him a handful of seconds as Miguel Ángel López (Astana), Urán, Quintana, Egan Bernal (Ineos Grenadiers), Guillaume Martin (Cofidis) and Richie Porte (Trek-Segafredo) all finished with the yellow jersey.

Pogačar clawed back 38 seconds on GC after a powerful attack in the closing kilometers of the Peyresourde. He moved up seven places on GC to ninth, 48 seconds off yellow with a performance that went a long way to redeem his position after the time he lost in the crosswinds in stage 7.

Jumbo-Visma co-leader Tom Dumoulin was among the others to lose time. The Dutchman was forced into action much earlier than Jumbo-Visma probably planned after Sepp Kuss and George Bennett were dropped on the final climb, and it was Dumoulin who nullified Alaphilippe's attack.

The 2017 Giro d'Italia winner almost made it back to the leaders before the summit, but Pogačar's late attack forced Bernal to chase, and at that point Dumoulin had to concede ground. He came over the line just over two minutes after Roglič and dropped 10 places on GC from fifth to 10th.

Further down the standings, there were disappointing days for Sergio Higuita (EF Pro Cycling) and Alejandro Valverde (Movistar) with both riders dropped on the final climb and eventually coming home in the same group as Dumoulin. Both Higuita and Valverde are hanging onto positions inside the top 20 on GC