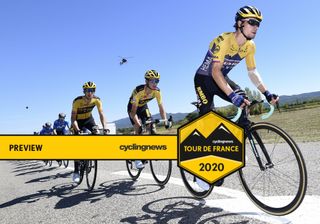 The riders make the race at the Tour de France, not the route. It was ever thus, and the hoary adage was borne out once again by an opening week where a stage earmarked for the sprinters provoked more drama and more telling gaps in the general classification than two mountaintop finishes combined.

The demanding 2020 parcours was hailed for its invention when it was unveiled last October but its onerous nature – not to mention Jumbo-Visma's striking collective strength – appears to have stifled the overall contenders' sense of adventure, rather than encouraged it. Aside from Julian Alaphilippe and Adam Yates' aggression on stage 2, the grand manoeuvres have been collective efforts, from Jumbo-Visma's forcing at Orcières-Merlette to Bora-Hansgrohe and Ineos Grenadiers' successive shifts on the front en route to Lavaur.

On Saturday, the Tour reaches the Pyrenees, where, for 110 years, desolate yet beguiling mountain passes have inspired some men to solo exploits, while singing many more to shipwreck.

"The Pyrenees are heartless, ruthless and atheist. Devoid of affection, a psychologist would say," the late Gianni Mura wrote, outlining precisely why the Pyrenees matter. The Tour, an endurance race shrouded in emotion, always benefits from an indifferent arbiter like the Pyrenees to lay everything bare.

As ever when the Tour first reaches the rarefied air of the Pyrenees or the Alps, there is an expectation that the pitch of the race will rise to its lofty surroundings – "The real Tour starts here," to cite another tired old truism – but Thierry Gouvenou, the man who designed this parcours, downplayed expectations for the weekend doubleheader when interviewed by Reuters, suggesting that Jumbo-Visma would again set a tempo to dissuade attackers.

"Maybe there will be more rhythm in the Pyrenees, but I think it's going to be a bit like Orcières-Merlette,” Gouvenou admitted. "We're impatient and demanding, but let's not forget that the Tour is three weeks long, and you can't be at 100 per cent for three weeks. They're managing their efforts."

The Tour is always an exercise in the management of accumulated fatigue. The race is just seven days old and – the coronavirus pandemic permitting – there are still two weeks to go. Men like Thibaut Pinot (Groupama-FDJ) saw little benefit in trying to attack a fresh peloton at Orcières-Merlette or Mont Aigoual, but the Frenchman suggested that the second leg of the Pyrenean doubleheader might offer more scope for aggression as legs begin to tire.

"We're focused on the Pyrenees. We need to make the race hard on Saturday to try to tire out our rivals and be able to attack them on Sunday," Pinot told L’Équipe, although he was speaking ahead of Friday's unexpectedly demanding day to Lavaur, which may have accelerated the softening-up process.

Groupama-FDJ trainer Fréd Grappe was more explicit. The task for Pinot – and others like him – is to isolate Primoz Roglic and Tom Dumoulin from their Jumbo-Visma guard and Egan Bernal from his Ineos cohort.

"To attack the leaders of Ineos Grenadiers or Jumbo-Visma, you need to get rid of their teammates first," he told L’Équipe. "So long as they still have a teammate in the mountains, it's very hard to defy them because the teammate will sacrifice himself to chase you down. The strategy consists of wearing them out."

The problem, of course, is that Jumbo-Visma have shown no signs of feeling the strain thus far. Wout van Aert's startling run of outsized performances has been emblematic of his team's post-lockdown form. Already winner of Strade Bianche and Milan-San Remo, he has now won two bunch sprints at this Tour and led the race most of the way up its first summit finish. At this rate, he might also be driving the bus and typing up the press releases by the time the race reaches Paris.

Yet for all their strength in depth, Jumbo-Visma have also been able to pick and choose their battles to this point, saving energy where possible. They rode briskly to tee up Roglic to pick up the stage win – and 10 bonus seconds – at Orcières-Merlette, but they gladly stepped aside to allow Ineos take up the reins on the Col de Lusette on Thursday.

Roglic reaches the Pyrenees in second place overall, just three seconds off the maillot jaune of Adam Yates (Mitchelton-Scott). Guillaume Martin (Cofidis) is third at nine seconds, while Bernal, Dumoulin, Pinot and Nairo Quintana (Ark­éa-Samsic) all lie 13 seconds off the lead. The visual impression of Jumbo-Visma and Roglic's pre-eminence has not (yet) been matched by the time gaps.

It remains to be seen whether they will seek to blow the Tour apart this weekend in the Pyrenees, or if they will instead continue to box clever and accrue an advantage incrementally by using Roglic's punch to pick up the bonus seconds on offer atop the final climbs on Saturday and Sunday.

"I don’t think that Roglic wants to burn down his teammates defending the lead," Gouvenou told Reuters. "It makes for a very quiet race because they know what's coming."

And yet, and yet. The lie of the land changed quite suddenly on the road from Millau to Lavaur on Friday afternoon. Until Ineos split the peloton on the race's exit from Castres with 40km to go, all the expected overall contenders lay within seconds of one another. But now Tadej Pogacar (UAE Team Emirates), Mikel Landa (Bahrain McLaren) and puncture-victim Richard Carapaz (Ineos) find themselves a further 1:21 down in the overall standings.

With Bernal suggesting the race will be decided in the third week, it was easy to envisage a situation where the podium contenders again rode conservatively in the Pyrenees, but Landa and Pogacar's unexpected setback might now add some urgency to their strategies. Landa has never needed much encouragement to throw himself onto the offensive, but Pogacar also has an attacker's instincts. At Orcières-Merlette, after all, he suggested over the radio that his teammate Davide Formolo try an acceleration, while he sent Fabio Aru up the road in a speculative effort at Mont Aigoual.

Others, too, might be tempted to test the waters. Adam Yates (Mitchelton-Scott) wears the yellow jersey, but his avowed aim is to win a stage, while Julian Alaphilippe (Deceuninck-QuickStep) seems keen to fight for every available second after losing the garment to a time penalty on Wednesday. Both men will be active in pursuit of the bonus seconds atop the Col de Peyresourde on Saturday and the Col de Marie-Blancque on Sunday. It's hard to imagine either man relenting on the drop down the other side to the finish.

The mighty Tourmalet is missing from the route for the second successive year, but the race's crossing of the Pyrenees is punctuated by familiar names. The first part of the double-header brings the peloton 141km from Cazères-sur-Garonne to Loudenvielle by way of the Col de Menté, Port de Balès and Col de Peyresourde, before a sinuous drop to the finish.

The opening phase appears relatively gentle – although much will obviously depend on how keenly Peter Sagan (Bora-Hansgrohe) and Sam Bennett (Deceuninck-QuickStep) want to contest the intermediate sprint after 42km – but the road pivots sharply upwards thereafter. After Orcières-Merlette on Tuesday, the race visits the other, doleful site forever associated with Luis Ocaña's star-crossed 1971 Tour, the Col de Menté. The road climbs for over 18km, but, officially, the first-category ascent begins 6.9km from the summit, with an average gradient of 8.1%.

Next up is the Port de Balès (11.7km at 7.7%), most renowned as the site of Andy Schleck and Alberto Contador's contretemps – 'chain-gate' – on the 2010 Tour, and that is followed in quick succession by the Col de Peyresourde (9.7km at 7.8%). The col is rarely accorded the same mystique as neighbours like the Tourmalet or Aubisque, but it always provides a white-knuckle finish when it features as the final climb of the day – and especially here, with an eight-second time bonus on offer at the summit.

In 2016, Chris Froome produced a remarkable descent of the Peyresourde to win in Luchon, while Rodolfo Massi held off Marco Pantani on the same finale in 1998. This time out, the peloton tackles the Peyresourde from the opposite side, but similarly white-knuckle drama could ensue on this side, as it did in 2003, when Alexandre Vinokourov attacked the yellow jersey group en route to Loudenvielle. He was later stripped of a win in Loudenvielle in 2007 after testing positive for blood doping.

In isolation, Saturday's stage is the tougher leg of the Pyrenean weekend, but fatigue should be a greater factor by stage 9 from Pau to Laruns. The 153km leg features the fourth-category Côte d’Artiguelouve early on, before the first-category Col de la Hourcère (11.1km at 8.8%) shortly before the midway point. The short ascents of the Col de Soudet and Col d’Ichère follow ahead of the wicked Col de Marie-Blanque.

The Marie-Blanque's average gradient of 8.6% only tells part of the story, as the slopes rarely drop below double digits in the last 4km, with long ramps in excess of 13% near the top. Once again, there are time bonuses on offer near the summit and the finish line is just an 18km descent away.

An ideal launchpad, in other words, but the riders themselves, as ever, will decide whether to avail of it. Roglic's yellow-and-black Jumbo-Visma guard might prove a more insurmountable obstacle than the Pyrenees themselves.