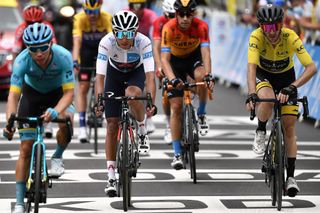 Egan Bernal (Ineos Grenadiers) did what he had to on stage 8 of the Tour de France and held most his key rivals for the yellow jersey in check, despite being put on the back foot several times on the final climb of the Col de Peyresourde.

The Slovenian put in several attacks on the Peyresourde and clawed back 40 seconds on all of his rivals while the Frenchman clipped off the front in the closing stages and just did enough to move ahead of Bernal in the overall standings.

After the first of two stages in the Pyrenees, the defending Tour de France champion is fifth overall, 13 seconds off Yates' yellow jersey.

"We did the last two climbs really, really fast," Bernal said after pulling on the best young rider's white jersey.

"This is the biggest race in the world so it's not easy to win. It's not easy to just drop people so I'm happy to arrive with them, in the first group and not lose time to the GC riders, like Roglič and the others."

Bernal, however, was far from his imperious best on the climb, although there are continued signs that he is steadily improving. He wasn't able to match a powerful acceleration from Roglič, Quintana and Pogačar, but like several other riders he slowly made his way back to the attack.

At the summit of the final climb Bernal also appeared to be hanging on and a small gap briefly opened between him and some of his rivals, but once again he dug in and crested the Peyresourde still in contention.

"That was hard, that was really, really hard," he said when asked about trying to follow the attack from Roglič.

"Especially the first part of the last climb, when Tom Dumoulin was doing a really hard pace. I had the feeling that I couldn't go at that pace until the final and I was looking at the numbers but I managed myself."

It was experience that helped Bernal in the finale as he set his own tempo. He contributed to the chase at several points but made sure that he never went too far into the red.

"When they attacked I couldn't follow but I thought that it would be impossible to do that effort until the finish of the climb so I did what was best for me and I did a good job. I should be happy. We need to have respect for the other riders, they were really strong, and it must be a really nice race to see on the TV."

Bernal was helped on the final climb by his teammate Richard Carapaz but the 2019 Giro d'Italia winner was unable to follow the best riders in the closing kilometres of the final climb and eventually finished 38 seconds down on his team leader.