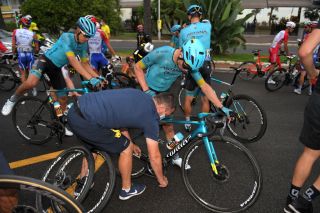 Tom Dumoulin and Luke Rowe were among the riders to criticise Astana after the finish of stage 1 of the Tour de France, but the Kazakhstani team insisted afterwards that it had all been a misunderstanding.

Heavy rain, a sinuous route and copious road markings made for a treacherous opening to the 2020 Tour and, led by Tony Martin (Jumbo-Visma), the peloton effectively elected to neutralise the race of its own volition with a shade over 50 kilometres remaining.

The body language from the Astana riders near the head of the bunch on the climb towards Aspermont had suggested that they weren’t entirely in agreement with the cessation of hostilities and their sky blue jerseys massed on the front on the descent, with Omar Fraile leading the way.

The brief stint of pace-making, though far from full-throated, saw four of their riders open a small gap over the rest of the peloton, which was intent on navigating the descent more gingerly.

Within minutes, however, Astana team leader Miguel Ángel López locked his rear wheel on a corner and skidded across the road. The Colombian showed remarkable dexterity to stay upright until he slammed to a halt against a signpost at the roadside. There ended Astana’s cameo on the front, with Primož Roglič (Jumbo-Visma) waving a hand in admonishment at Fraile as he knocked off the pace.

“I didn’t want to accelerate, I just wanted to set the pace. It was all very dangerous. If you touched the brakes, you hit the ground,” Fraile said afterwards, and his explanation was echoed by sports manager Dmitriy Fofonov, who stressed that his team had not come to the front to break the general truce but simply as a precaution.

“With so many crashes, we advised the team to come to the front and to do the downhill with our pace to try to avoid the crashes,” Fofonov said.

It was easier said than done in such conditions. On slick roads such as these, “like riding on soap,” as Fraile put it, crashes seem to happen at all speeds. George Bennett (Jumbo-Visma) was descending at almost walking pace when he crashed, while many other riders went down in high-speed crashes through the day, including Nairo Quintana (Arkéa-Samsic) and Thibaut Pinot (Groupama-FDJ) and Julian Alaphilippe (Deceuninck-QuickStep).

López, for his part, remounted quickly after his crash and rejoined the peloton, and though he was held up by another crash with 3km to go, the Tour debutant reported no lasting injuries from his fall.

“We all saw there were a lot of crashes and the route was a bit dangerous, with tricky descents and a lot of paint on the road. There was obviously a lot of tension too, because of the rain. Together, that meant we almost all ended up on the ground,” López said afterwards.

“I went down too, but fortunately there isn’t anything important to complain about, it could have been worse. I crashed into a road sign, but fortunately I made it to the finish. Now I want to recover as well as possible because tomorrow we have another difficult stage.”

Fraile, López, Ion Izagirre and Harold Tejada were all held up by the crash that split the peloton just inside the final 3 kilometres, but none of the quartet sustained serious injuries in the incident. The jury had already decreed that, due to the conditions, the time for the general classification would be taken with 3km to go.

“We had another crash with 3km to the finish, but everything looks OK for our riders,” Fofonov said. “We hope that the weather will be good tomorrow.”

Alexander Kristoff (UAE Team Emirates) carries the maillot jaune into Sunday’s stage 2, where the climbs of the Col de la Colmiane and the Col de Turini will serve as a rendezvous for López and his fellow GC contenders.