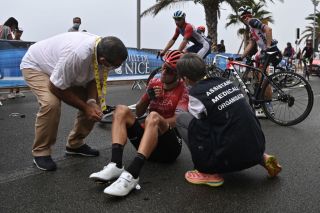 Rain, twisting descents and race tension sparked a number of crashes during the first stage of the Tour de France around Nice.

Pavel Sivakov (Ineos Grenadiers) was caught up in one of the first to crash after 50km. He then crashed again after a lone chase on the descent, as Julian Alaphilippe (Deceuninck-QuickStep) also chased back on after a slow bike change.

Sivakov had blood pouring from both of his arms and struggled to steer his bike. He was four minutes behind the peloton as the rider passed thorough the finish in Nice, with Ineos Grenadiers leaving him to ride on alone.

The rain poured on the rider on the first descent of the Côte de Rimiez and sparked further spills. Egan Bernal (Ineos Grenadiers) was also off the back at one point as the peloton split on the descent.

Nairo Quintana (Arkea-Samsic) crashed at the top of the Côte de Rimiez but jumped up and got back on his bike quickly.

Luke Rowe of Ineos Grenadiers and George Bennett of Jumbo-Visma team tried to convince the peloton to ride carefully in the rain but others were keen to race on.

Veteran Tony Martin (Jumbo-Visma) convinced the peloton to ride carefully by waving his arms. Astana tried to up the pace only for cycling Karma to intervene and Miguel Angel Lopez lock-up his brakes and crash slowly into a sign post.

The peloton then decided to ease up and ride the final climb and descent together before racing again along the coast road.

Upon request of a number of riders, the race commissaires decided to take the times for the general classification at the three-kilometre to go mark point in order to avoid danger in the finale.

A final crash saw more riders go down, including Thibaut Pinot (Groupama-FDJ) but the crash ocurred 10 metres or so inside the three-kilometre point and so all the riders affected were given the same time as Kristoff.

“Everybody was crashing around but I told myself it was easier than riding on ice on Norway," Kristoff said.

"I think it was the right call to take it easy on the downhills so we don’t lose any big contenders on the first day."