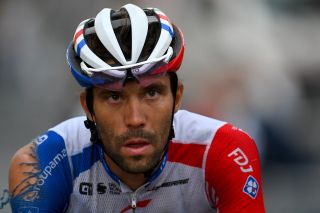 Thibaut Pinot (Groupama-FDJ) crossed the stage 1 finish line in Nice with road rash showing through a hole on his right shoulder and hip, and an expression of despondency on his face, but was fortunate to crash inside the three-kilometre to go point so didn't lose any time in the general classification at the Tour de France.

"It was a difficult day, certainly one of the worst of my career, a bit like it was for the whole peloton," Pinot said after the race. "It was clearly as if we were riding on ice. Riders were falling even when the race was neutralised."

Pinot had recently crashed at the Route de l'Occitanie and the Critérium du Dauphiné when racing returned. Last year he was forced to abandon the Tour de France due to a muscle injury.

This time he went down with teammates David Gaudu and William Bonnet, while Valentin Madouas also took a spill earlier in the stage as late summer rain turned the dry roads of the Cote d’Azur into a crash lottery.

A number of riders went down at different points in the 156km stage and when the race judges opted not to neutralise the race, the peloton took things into their own hands and slowed the pace on the last climb and testing descent.

The racing resumed along the flat and straight coastal road along the French Riviera with Alexander Kristoff (UAE Team Emirates) winning the sprint and taking the first race leader yellow jersey.

Race officials did act in the final moments of the race, deciding that the stage times would be taken at the point with three kilometres to go. The crash involving Pinot occurred just 10 or so metres inside the three-kilometre mark and so he and everyone else were given the same time as Kristoff, and Pinot avoided any damage to his overall hopes of victory.

“Like anyone who has a crash in the finale, he was annoyed and a bit tense. But after a good night’s resort, things should be fine tomorrow,” Groupama-FDJ team manager Marc Madiot explained to the French media, desperate for information on the home nation's biggest overall contender.

“He's not the only one on the team to have gone [down] and I hope everything will end well for everyone."