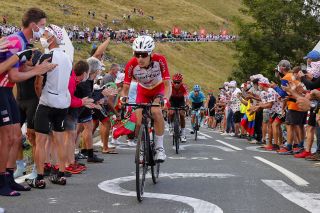 The host nation’s Tour de France drought looks set to continue for at least another year after Guillaume Martin (Cofidis) and Romain Bardet (AG2R La Mondiale) were distanced by the yellow jersey group on the Col de Néronne in the finale on stage 13 to Puy Mary.

On a day when Primož Roglič (Jumbo-Visma) added 38 seconds to his lead over Egan Bernal (Ineos) after attacking in the company of Tadej Pogačar (UAE Team Emirates) on the steep final haul up Puy Mary, Martin and Bardet both conceded more than two minutes to the yellow jersey to slip out of the top ten overall.

Martin had begun the day in third place on general classification, 28 seconds behind Roglic, but he lost 2:46 on the Slovenian by the finish at Le Puy Mary to slip to 12th at 3:14. Bardet drops from 4th overall to 11th at 3:00 after losing 2:30.

The AG2R leader had been a faller with 90km remaining in the same crash that forced Bauke Mollema (Trek-Segafredo) out of the race. Bardet remounted slowly and managed to chase back on, but he looked to be struggling the effects of that crash when he was dropped from the group of favourites at the same time as Martin.

Ineos Grenadiers were setting the tempo at that point before Jumbo-Visma took over, and Martin and Bardet both trailed the yellow jersey group by more than 20 seconds atop the Col de Néronne with 11km remaining. Their deficit expanded rapidly on the short but wickedly steep climb to the finish, where Pogačar and Roglič's forcing splintered the group of favourites ahead of them.

Martin battled gamely to crest the top of the Néronne just over 10 seconds down on the reduced yellow jersey group, but the gap grew on the plateau that led into the base of the Puy Mary, where he had Mikel Landa’s Bahrain McLaren teammate Pello Bilbao sitting on his wheel. Once the gradient began to bite on Le Puy Mary, Martin’s deficit extended still further, and he was caught and passed by Bardet on the final ramps of the climb.

“I was dropped near the top [of the Neronne]. I wasn’t missing a lot, but I went over the top 10 seconds down and that changed my race,” Martin told France Télévisions. “It meant I was alone in the flat part, the transition before the last climb. I lost quite a bit of time and, above all, quite a bit of energy there, and that cost me on the last climb, where I lost a lot of time. It was bad day, but the Tour obviously isn’t over.”

The 27-year-old has improved in his three Tour appearance to date and he entered the 2020 edition on a high after a fine third place finish at the Critérium du Dauphiné. Martin impressed at Orcières-Merlette on stage 4 and again on the Col de Peyresourde on Saturday, though he was among the fallers on stage 10 to Île de Ré. He described his struggles at Puy Mary simply as a ‘mauvais jour.’

“In the heat of the moment, it’s hard to explain, it’s just that the others were stronger: I’m not looking for excuses,” Martin said. “It was a bad day. We’ll see if I’m on the way down or if it was just a bad day, but in any case, I’m still motivated for what’s to come.”

Martin had begun the Tour with the stated aim of winning a stage rather than targeting a high overall finish, a topic he touched upon in an interview with Cyclingnews earlier this year, when he noted that his 12th place finish at the 2019 race had passed almost unnoticed.

“I was consistent every day, but there was never a grand gesture,” Martin said of last year's race. “It was a Tour where I was satisfied with the work done, but I came away with a slight feeling that something was missing.”

Now more than three minutes down on Roglič and two minutes off a podium place, he might have greater freedom of movement in the days ahead.

The disappointment was perhaps more pronounced for Bardet, who was racing on home roads in the Auvergne and had enjoyed his best opening half to a Tour since he last placed on the podium three years ago.

“It couldn’t have gone any worse today,” Bardet said, according to Cyclismactu. “A rider lost control in front of me. I avoided him but I fell at 65kph. I banged my head and I struggled to snap out of it. The crash left its mark on my right leg. I lost all my sensations after the crash. It’s a day to forget from a sporting point of view. I was cursed. I’m going to recover and start looking for stage wins now. The general classification? It’s too far now. It’s a pity, everything was going well. It’s a big stroke of bad luck.”

Bardet and Martin will look to respond in the days ahead, but after Thibaut Pinot and Julian Alaphilippe both fell out of the fight for the yellow jersey in the Pyrenees, France’s hopes of bridging the 35-year gap to Bernard Hinault’s final Tour win look to have been extinguished in the Massif Central.