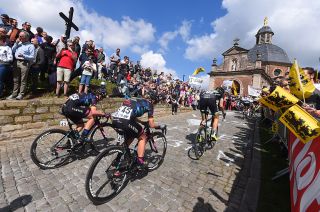 The 2020 Tour of Flanders could take place on the Saturday preceding the World Championships after the Primus Classic offered to give up its September 19 calendar slot, though Flanders Classics CEO Tomas Van Den Spiegel insisted that any new date would only be decided after consultation with the UCI.

The Tour of Flanders was originally scheduled to take place last Sunday but was postponed due to the coronavirus pandemic, together with all the Spring Classics and the Giro d’Italia. All racing until June 1 has since been suspended, while a number of races in June – including the Tour de Suisse – have been cancelled with the plan to return in 2021.

The UCI has discussed contingency plans to extend the season into November and to hold the postponed Classics and Giro d'Italia in the Autumn. The Tour de France reportedly has a Plan B, with the sport's biggest Grand Tour hoping to go ahead a month later than planned, between July 25-August 16.

Behind the scenes at the 100th Tour of Flanders - Video

With much of the world in lockdown due to the COVID-19 pandemic, however, it remains unclear when or whether competition will be able to resume this season.

On Tuesday, Philip Beke of the Primus Classic organising committee told Het Laatste Nieuws that they were willing to give up the race’s September 19 date to the Tour of Flanders, providing the event’s sponsors gave their permission.

"There have been discussions," Beke said. "We might want to lend a helping hand and give up our place once, but only on the condition that our sponsors agree."

Van Den Spiegel, who on Sunday expressed hope that the Ronde would take place in 2020, later confirmed that Flanders Classics has been in talks with the Primus Classics organisation.

"It fits in with the tenor of the past weeks, where there has been a lot of speculation about what the calendar might look like," Van Den Spiegel told Het Nieuwsblad.

"It is true that there have been talks, but the fact is that the decision about the new date for the Ronde is not up to us. It's the UCI who will decide what the calendar will look like. We certainly don't want to go on a solo run.

"Why did we talk to GP Impanis? Because it is good to know that we can have other solutions if necessary. It is good that such a scenario can be discussed, but at the moment I wouldn't even call it plan B. Right now, it's the UCI's turn."

The UCI staked out its territory in the Autumn calendar last week when it confirmed a schedule for the World Championships in Martigny from September 20-27 that sees the elite men’s individual time trial move to the opening Sunday, a spot previously occupied by the team time trial events.

The decision drew criticism from team managers including Richard Plugge (Jumbo-Visma) and Patrick Lefevere (Deceuninck-QuickStep), who felt the UCI should have endeavoured to keep the weekend of September 19-20 free for rescheduled races.