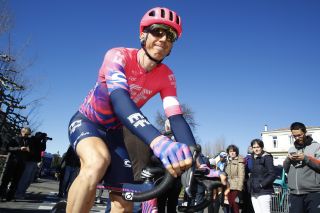 EF Pro Cycling’s Sep Vanmarcke is all smiles at the start of stage 2 of the 2020 Tour de la Provence in Aubagne (Image credit: Bettini Photo)

EF Pro Cycling's Sep Vanmarcke should have been attempting to go one better than his second place behind Fabian Cancellara in 2013 at Paris-Roubaix on Sunday. Instead, as the coronavirus pandemic continues, the Belgian has been at home with his family – doing some gardening, and training for whenever the racing restarts.

"I'm sitting here quietly weeding on what actually should be one of the most hectic days of the year," Vanmarcke told Het Nieuwsblad from his home in Azegem in north-west Belgium – not far from Roubaix, just over the border in France.

Vanmarcke was left in tears after finishing fourth at Paris-Roubaix for what was the third time in his career last year as a result of his gears jamming on the final sector of cobbles.

Vanmarcke on coronavirus: It's a bad situation

"I would have been up there, I'm sure," he said of his chances for the race that was scheduled for April 12. "The Omloop Het Nieuwsblad [which took place on February 29] was disappointing" – Vanmarcke was 23rd – "but that was factored in a bit.

"At Paris-Nice [March 8-13], I was approaching something like top form while working hard for Sergio Higuita," he added. "I was ready for spring. But what's happening now is affecting everyone, and we cyclists shouldn't complain because there are a lot of people who been far more impacted.

"That's why I've not been losing heart and have kept training. On Friday, I trained for five hours: two hours of fitness and three hours on the bike," said Vanmarcke. "When it comes to endurance training, I alternate things a bit to keep it fun: I go cycling in the hills, and then on the flat, or go mountain biking in the forest."

"It's possible that it could happen, and it would make it even more special to win," he told Nieuwsblad.be. "But it will depend on how this coronavirus crisis evolves. My fear is that a number of sponsors will drop out, which wouldn't be unexpected. Many companies are struggling, and are seeing their turnover drop sharply. There could even be teams that cease to exist."

In addition, Vanmarcke is in a 'contract year' with EF Pro Cycling, who he joined in 2017 when the US WorldTour team was known as Cannondale-Drapac.

"But I'll be 32 at the end of July, and I think the team now knows what they can expect of me, and I can certainly perform at the top level for a few more years yet," said Vanmarcke. "I'm also nicely paid by the team, and for now we haven't had to take a pay-cut, so I don't want to worry. We must all accept this situation and make the best of it."

Being at home with his family has been made even more special by the good weather across northern Europe this Easter.

"I've been doing a lot of stuff with my wife – including the weeding," he laughed. "I've enjoyed it, and have enjoyed being able to play a lot with my children.

"Since becoming a father, I've learned that racing is not the most important thing in life. But that is precisely why I started to enjoy racing even more: I worry less about it. I realise that I'm already far past halfway through my career, but I can still achieve great victories. I am absolutely convinced of that.

"But, for now, there are more important things. No one in my family has yet been affected by the coronavirus, and hopefully it will stay that way," said Vanmarcke. "So I can't complain – there are many families who are having a much harder time. Let's just hope that the situation will return to normal soon."