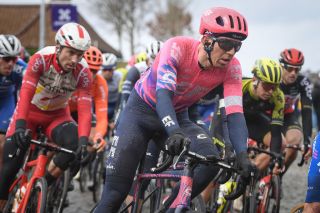 Belgian Classics specialist Sep Vanmarcke is supposed to already be in Tuscany, Italy, for this Saturday's Strade Bianche, but a combination of its likely cancellation due to coronavirus concerns and his own EF Pro Cycling team's request to the UCI and race organiser RCS Sport for them not to have to ride the upcoming Italian spring races means that Vanmarcke is training at home in Belgium, waiting to see what happens next.

According to Het Nieuwsblad, the 31-year-old is hoping to instead race at Paris-Nice, which is due to start in Plaisir, just outside Paris, on Sunday. And while the French stage race is looking far more likely to happen than Strade Bianche – due to the Italian government's directive that all sporting and public events are cancelled for the coming month – Paris-Nice is also in danger of not running after a number of teams' doctors, including those at EF Pro Cycling, wrote to the race organisers to suggest the cancellation of all of the upcoming racing.

"It's a bad situation, but we can only wait," Vanmarcke told Het Nieuwsblad on Wednesday. "I hope the team will now send me to Paris-Nice, because then I don't have to change too much in my [training] structure heading towards the Classics.

"But there are now 30 [EF Pro Cycling] riders who are trying to get one of eight spots for Paris-Nice, so, if I'm not one of them, I hope that our team might run a very professional training camp, which simulates racing," he said. "I wouldn't be worried if I had to do that; due to injuries in the past, I've often had to prepare for the most important race-weeks of the year with very little racing.

"I'm not too worried about it, as that doesn't help," he continued. "In the world of racing, we can be a little short-sighted, and maybe we shouldn't be racing if the risk of getting the virus is increasing.

"Stopping it should be our first concern," said Vanmarcke. "That's more important than racing."