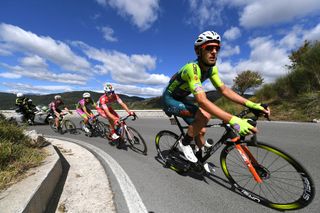 When Luca Scinto warms to a topic, he doesn't so much answer a question as deliver a soliloquy. "Maybe if I was more diplomatic, my career would have been different instead of being with a small team, but I'm proud of what I am," he told Cyclingnews by way of an opening gambit at the Giro d'Italia in Cervia on Friday morning. "I'm stubborn and I say what I think."

The topic in question was EF Pro Cycling's request – already rejected by the UCI – for the Giro d'Italia to be brought to a unified halt this weekend due to what they described as a 'compromised' coronavirus bubble on the corsa rosa.

Eight cases of COVID-19 were confirmed on the rest day in addition to Simon Yates' positive in the opening week and two WorldTour teams – Jumbo-Visma and Mitchelton-Scott – have already left the race. EF Pro Cycling have said they will leave the Giro in the event of a confirmed case among their riders and staff.

Just as the Tour de France is the raison d'être for most WorldTour sponsors, the Giro is the most important event on the calendar for the backers of Scinto's Vini Zabù-KTM squad. He decried what he perceived as a double standard in some WorldTour teams' differing attitudes to the coronavirus protocol at the Giro and the Tour de France - where four staff members from four different teams and race director Christian Prudhomme tested positive for COVID-19 on the first rest day.

EF Pro Cycling call for Giro d'Italia to be stopped

Fear inside Giro d'Italia peloton: The only bubble is the one in my face mask

De Gendt: We are starting to feel unsafe at the Giro d'Italia

"Some teams at the Tour were always silent, they never raised their voices. I'd like to ask this question of EF: are they going to go to the Vuelta? If they're afraid of COVID, then why go to the Vuelta?" Scinto said.

"We're in the middle of a tragic moment for humanity, not just for cycling. The virus exists and it's dangerous, but we have to fight it and not just criticise when it's easy to criticise. If EF don't like it, they can leave the Giro and go home.

"I have nothing against them, but I have a problem when people came into the Giro already fully aware of the problems. I hope the Vuelta goes ahead and is raced to the end. We need it, because otherwise, in 2021, we won't race at all.

"It's normal to be afraid, we all feel it. But the problem is that at the Tour, they were all quiet but now at the Giro, they're giving themselves permission to leave. Mitchelton's situation was different, because they had a lot of cases and it was correct to make that choice, but if [Primoz] Roglic had come here to win the Giro, would Jumbo-Visma have left the race?"

Scinto confirmed that his Vini Zabù-KTM squad had not been informed beforehand of EF Pro Cycling's petition for the Giro to end this weekend. "They certainly don't talk with us. They're superior, we're only a small team," said Scinto, who reiterated his desire for the Giro to continue to its planned conclusion in Milan on October 25.

"Even with just one rider left, we'd go to Milan, because otherwise in 2021, what will we do? Stop stage races? Stop racing altogether?"

Scinto's feelings were echoed forcefully by another manager of an Italian wildcard invitee, Gianni Savio of Androni Giocattoli-Sidermec, who described EF Pro Cycling's letter to the UCI as "shameful".

"What EF did yesterday was absolutely inopportune, unqualifiable and totally shameful," Savio told Tuttobici. "I feel there was a total lack of respect towards the organisation and also to us. At the very least, they should have spoken with the other teams. We certainly would never have shared their opinion. Addressing the UCI directly with a request like that is absolutely shameful."

EF Pro Cycling manager Jonathan Vaughters has since confirmed that he had not consulted with his riders and staff on the Giro before writing to the UCI requesting an early end to the race. Fabrizio Guidi, who is the EF lead directeur sportif on the Giro, was pressed into the role of diplomat on RAI on Friday evening.

"We probably overestimated the problem and the communication to the UCI was a bit too hasty," Guidi said. "The riders, like the whole staff, want to get to Milan and keep racing. And, personally, I really owe everything to the Giro d'Italia, so I wouldn't want to leave it."

Since receiving the EF letter, the UCI requested that RCS Sport carry additional saliva antigenic tests on all riders and staff in the Giro bubble on Thursday and Friday before the next round of PCR testing on the second rest day on Monday.

On Friday, Italy reported 10,010 confirmed cases of COVID-19, the highest daily tally recorded in the country to date.