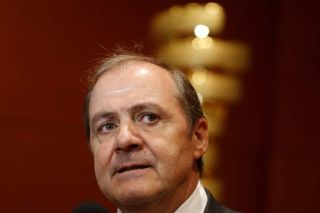 Giro d’Italia race director Mauro Vegni has defended the race’s COVID-19 coronavirus protocols in the wake of a rejected appeal from EF Pro Cycling to bring the race to a halt after Sunday’s stage to Piancavallo.

EF Pro Cycling wrote to the UCI and RCS Sport calling for the Giro to be stopped on its second rest day due to what they described as “a clearly compromised bubble”, but the request was rejected by the UCI.

Mitchelton-Scott and Jumbo-Visma left the Giro on Tuesday after having COVID-19 cases confirmed during testing on the first rest day. A total of three riders and six staff members across five teams have tested positive for COVID-19 since the Giro began in Palermo.

Vegni insisted the Giro d’Italia would do everything possible to reach the finish in Milan on Sunday, October 25.

EF Pro Cycling call for Giro d'Italia to be stopped

Fear inside Giro d'Italia peloton: The only bubble is the one in my face mask

De Gendt: We are starting to feel unsafe at the Giro d'Italia

“It seems to me that they’re the same measures that were adopted by all the organisers of a certain level. These are the same measures that were used in the other races, so I don’t see why the Giro should be seen as being worse than the others,” Vegni told reporters, including Cyclingnews, at the press centre in Cesenatico after the finish of stage 12.

“On the first rest day we had eight positives. How many were there in other places? We’re in October, the trend is going upwards. Today there were almost 9,000 cases [in Italy] so obviously there’s a bit more stress than there was in August.

“But I repeat: this virus isn’t something we just discovered today. It’s a virus that exists and one that we’ll probably have to fight against all next year too. We need to have the courage to go on: not just in cycling, we need to go on as a community. We have to fight with our heads held high, looking ahead.”

News of EF Pro Cycling’s request to halt the Giro emerged on Thursday afternoon after the letter and the UCI’s reply were leaked to Eurosport.

Asked if EF Pro Cycling had contacted him directly with their concerns, Vegni said: “I think it was something written among teams and maybe also to the UCI. I received some things, but I haven’t seen [EF manager Jonathan] Vaughters around here. This morning, talking about it with the guys from the team, they didn’t know either, so you can draw your own conclusions.”

Concerns about the Giro bubble heightened further on Thursday morning when it emerged that 17 police officers marshalling the Giro E-Bike event – which takes place on the same roads a couple of hours before the main event – had tested positive for COVID-19.

RCS Sport confirmed the positive tests but stressed that the officers accompanying the Giro-E were not part of the race bubble and had no contact with staff and police on the Giro d’Italia.

Thomas De Gendt said that the Lotto Soudal team had debated whether to continue the Giro on the team bus ahead of stage 12 after learning of the positive cases among the Giro-E police officers. Speaking to Sporza, the Belgian also expressed doubt as to whether the cases were restricted to the Giro-E.

“I phoned his team manager during the race and said that when he says something, he needs to be careful about what he says. To say that we might have fixed the results is very serious, there’s international health at play here,” said Vegni, who acknowledged that riders would have been alarmed by the headlines they read on their way to the start on Thursday morning.

“I hope they’ll be calmer this evening when they see the full story,” he said.

Although the UCI rejected EF Pro Cycling’s request for the Giro to be brought to a halt, the governing body said that a general screening of the teams is being carried out on Thursday and Friday in addition to the next round of PCR testing planned for the second rest day on Monday.

“I respect the riders and the fears of the riders, because obviously we’re talking about health and I respect that,” Vegni said.

“Those around them, who are supposed to be creating a bubble of calm around them, shouldn’t be behaving in this way. There have also been incorrect behaviours within the bubble on the part of teams but I’ll leave it there.”