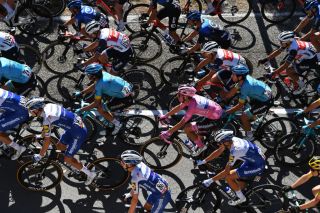 Twenty-four hours after two teams left the Giro d’Italia amid a spate of positive COVID-19 cases, uncertainty and fear have gripped the peloton.

On Tuesday it was announced that Steven Kruijswijk and Michael Matthews had tested positive for the virus, while four members of the Mitchelton-Scott staff and one member each from Ineos Grenadiers and AG2R La Mondiale had also returned positive samples.

The wave of positive cases led to the withdrawal of Jumbo-Visma, with the Dutch team telling Cyclingnews that they put the safety of their riders and staff above all else. Mitchelton-Scott, who lost Simon Yates to a positive test earlier in the race, also pulled out, while Team Sunweb and the other affected teams remained.

Jos Van Emden, who left the race alongside his Jumbo-Visma teammates, was one of the first riders to speak out, telling the Cycling Podcast that race organisers RCS Sport and the UCI needed to take greater responsibility to protect those within the race.

Coronavirus makes Giro d'Italia a race with no tomorrow

Van Emden: The UCI should get the bill for Giro d'Italia COVID-19 positives

RCS Sport has been scrambling to manage the situation, rolling out hundreds of tests and trying to keep the race going for as long as possible. But with COVID-19 cases on the rise in Italy and across all of mainland Europe, the Giro d’Italia is coming under increasing pressure.

Ahead of stage 10, just after the news of the positive cases broke, race director Mauro Vegni told RAI that the aim was still to bring the race to its conclusion in Milan on October 25.

"We absolutely want the Giro d’Italia to make it to Milan," Vegni said.

"I’d say at any price, excluding any major or medical problems. We knew holding the Giro in October was problematic, we’re doing all we can to make it to Milan with all the doubts and challenges."

Cyclingnews spoke to one rider who is still in the race. He did not want to be named but he told us about the lack of protection and safety measures within controllable environments such as team hotels, and how riders were often obliged to share dinner buffets with members of the race organization and the general public.

Teams have been grouped together at the Giro d’Italia in far greater numbers than at the Tour de France, while there have been several reports over a lack of segregation between those supposed to be in a bubble and those outside of it.

The UCI Emergency rules drawn up specifically for the COVID-19 pandemic state that the teams should sleep in separate wings of hotels and have "a reserved and independent dining room, whenever possible". A number of teams, including Bora-Hansgrohe, Ineos Grenadiers and UAE Team Emirates, have separate food and dining trucks at the Giro d’Italia, while other teams accepted to eat in their hotels.

"There is not much to say, just that some riders don't feel safe knowing they might catch it any day, or the race will end any second," the rider told Cyclingnews ahead of stage 11.

The rider also raised concerns over the lack of consistency within the race.

Jumbo-Visma pulled their entire team after one positive rider, while Mitchelton-Scott hung on until more of their entourage were infected. Team Sunweb remain in the race despite Matthews’ positive case.

On Tuesday, Team Sunweb, who have Wilco Kelderman in contention for the maglia rosa, defended their stance, with director Luke Roberts telling the media at the race: "Basically, we're just following the rules we agreed upon with the UCI and with the organisation before we came, the protocol we follow in stage races. That's basically the decision that we made."

When asked if the team had considered following Jumbo-Visma’s lead, Roberts added: "No, I think we're confident in the way we're working inside our bubble, with the distancing. We isolated Michael and the team will be regularly tested. We'll just follow the protocols agreed upon."

According to our source within the peloton, teams remaining in the race after a positive case were putting the health of others in jeopardy as well as sending the wrong message.

Vegni confirmed that all the teams with positive COVID-19 cases were tested for a second time on Monday using rapid tests, with a second round of tests planned for Thursday to try to detect any developing cases. All race staff have also undergone rapid tests.

"There also seem to be different rules for different teams, so we all expect explosions with the teams who have infected staff and they were at dinner and working with riders, so the next rest day will show it," said our source.

"The problem is that by the time those tests come back it’s too late. Also, it’s not clear why some teams left, but teams with good GC riders stay. It raises the question as to whether results are more important than health. Everyone is wondering why Sunweb, for example, are still here when Mathews was a close contact to everyone in the team."

When asked if the Giro d’Italia should simply be stopped at this point, the rider was unsure.

"I don’t know," he told Cyclingnews. "But we can see from the effect of one rider - Yates - until now. From now to next rest day that could be magnified so much more. The scary thing is, there will be riders racing with it (COVID-19) like before without knowing, because we won't be tested until next Monday and no rider wants to risk their health.

"There are no real bubbles, we have shared with other teams, with race organisers, we have not had private rooms to eat in and shared dining halls with them all. We just wear masks 24/7 and the only bubble around us is the ones we have inside our masks.

"We race like it’s the last day. Riders talk saying it's crazy and it’s going to start to look really bad soon but RCS... they can't do anything, other than wear the damage they have caused to the individuals that were infected at their race. We all just want to go home and be safe."