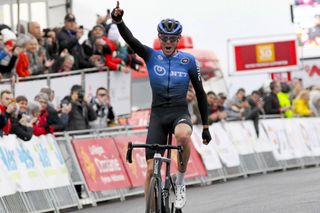 During the tough, three-stage French race, which was formerly known as the Tour du Haut-Var, O'Connor and Meintjes will go up against some of the world's best current crop of climbers – namely 2019 race winner Thibaut Pinot (Groupama-FDJ), AG2R La Mondiale's Romain Bardet, Trek-Segafredo's Richie Porte and the recent winner of the Tour de la Provence, Nairo Quintana (Arkéa-Samsic).

"Being a very hilly three-day race through the Alps Maritimes, personally I'm excited to give this race a good nudge," said O'Connor on the NTT website. "The first day, in particular, could be very unstable, and, with our Classics boys here, it will be interesting to see how we tackle the race. If our previous races are anything to go by, we will for sure be taking it on."

The team certainly seems somewhat revitalised compared to recent seasons, perhaps as a result of the arrival of new team manager Bjarne Riis at the start of the year. Compared to last year, when the team – then riding under the banner of Dimension Data – won just seven races, NTT have already taken five victories in 2020, and seem to be on track to take more, having this season signed the likes of Victor Campenaerts, Domenico Pozzovivo and Max Walscheid, with the latter winning two stages at the Tour de Langkawi last week.

While Meintjes and O'Connor hunt stage wins and a good GC finish, Boasson Hagen and Valgren continue their build-ups towards the spring Classics, which start with the Omloop Het Nieuwsblad in Belgium on February 29.

Set to accompany them there are Michael Gogl, Andreas Stokbro and Reinardt Janse van Rensburg, all of whom also feature in NTT's line-up for the Tour des Alpes Maritimes et du Var.

Besides O'Connor, Meintjes is the only other climber in the line-up for the team for this weekend's race, and with O'Connor having kick-started his 2020 season with his stage win at the Etoile de Besseges earlier this month – on the back of a forgettable 2019 – Meintjes will be hoping for a similar turnaround in fortune, with the South African having last tasted victory in 2015 when he won the final stage and took the overall title at the Settimana Internazionale Coppi e Bartali.

Following Friday's opening stage from Le Cannet to Grasse, and stage 2 on Saturday, which goes from Pégomas to the climb of the Col d'Eze, the pair may have a chance to either contest the overall victory or race for a stage win on the final stage on Sunday, which starts in La Londe-les-Maures and finishes on the climb of Mont Faron, overlooking Toulon, which will be familiar to many as having regularly featured as the finale of the now defunct Tour Méditerranéen.