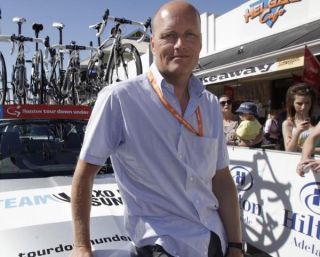 The NTT Pro Cycling squad confirmed that they have partnered with Bjarne Riis' Virtu Cycling, with Riis and partners Lars Seier Christensen and Jan Bech Andersen snapping up a third of the ownership shares.

Riis will become the manager of the UCI WorldTeam to try and right the ship that sunk to the bottom of the World Rankings (just above the now-defunct Katusha-Alpecin) and scored just one WorldTour win in 2019, Edvald Boasson Hagen's stage of the Critérium du Dauphiné.

Douglas Ryder, the team's founder and principal, lauded the agreement, calling it a "significant moment" in the team's history and for its future.

"The expertise and breadth of experience that Bjarne Riis will provide in supporting the sporting development through our unique technology-driven performance approach will be hugely significant," Ryder said.

"I believe this partnership will benefit the entire team to help them achieve great results," he added, optimistically stating he believes it will help the team "become one of the best in the world" in the coming years.

After retiring as a professional cyclist and former Tour de France winner, Riis formed what would become Team CSC, Saxo Bank and then Tinkoff-Saxo. He built the team to the top level through signing riders like Laurent Jalabert and Tyler Hamilton.

Jalabert claimed the team's first Tour de France stages in 2001 and won the mountains classification, and Hamilton landed the team's first Grand Tour podium in the 2002 Giro d'Italia. After Jalabert retired, Riis hired Carlos Sastre, who went on to win the Tour de France for the team in 2008, and after Hamilton's departure Riis brought in Ivan Basso and Frank and Andy Schleck, who would form the cornerstone of the team's Grand Tour ambitions for years to come.

Riis had a controversial side as well. As the cycling world attempted to right itself after Operacion Puerto, Riis, pressured by revelations in a book by former soigneur Jeff d'Hont, admitted to using performance-enhancing drugs like EPO, growth hormone and cortisone during his career including 1996 when he won the Tour. The admission cost him his title sponsor, but he found a replacement in the form of Saxo Bank thanks Lars Seier Christensen and spearheaded internal doping controls that were eventually replaced by the UCI biological passport.

In 2010, however, fractures began to form as Saxo Bank was in its final year as a sponsor. The team signed Alberto Contador while the Schleck brothers, Cancellara, Voigt and O'Grady and DS Kim Andersen all left for the nascent Leopard-Trek squad in 2011. In 2012, Oleg Tinkov arrived as the team's new sponsor. The next year, Tinkov bought the team and while he kept Riis on as manager, conflicts eventually pushed Riis out of the picture for good.

Riis returned to found the Virtu Cycling organisation with Seier, starting a men's Continental and a women's squad as well as travel, business team building and sportswear ventures, with an explicit goal of bringing a WorldTour team to Denmark. He was linked to Patrick Lefevere's Deceuninck-Quickstep team and Igor Makarov's Katusha-Alpecin squad. With NTT, Riis can finally realize at least a third of Virtu's dream.

"This is a proud moment for our organization, Virtu Cycling, and I'm really excited by this partnership and its potential. Together, I believe we can develop one of the world's best cycling teams built on being performance and technology-driven, combined with our many years of experience from the World Tour," Riis said.

"We have had some thorough and fruitful talks and meetings with Doug Ryder on the team's future and potential. I'm really looking forward to our collaboration and to take on the sporting leadership of the team in this new setup.

"I have nothing but admiration for what Doug has built and achieved with this team starting on continental level onwards to become a WorldTour-team, for his contribution to cycling and his work and support for the Qhubeka Charity. Together, I believe we can take the team to the next level and make it a team that everybody – riders and staff - want to be a part of."