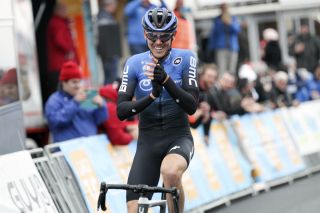 After a lacklustre 2019 season, Australian Ben O'Connor says his victory on Mont Bouquet in Étoile de Bessèges is a welcome fresh start. The NTT Team rider proved his climbing chops in his first two seasons with the team, winning stages of the Tour of Austria in 2017 and the Tour of the Alps in 2018 ahead of a true breakout performance at the 2018 Giro d’Italia, where he looked to be heading for an overall top-10 finish before crashing out. But further crashes and struggles to find top form prevented him from living up to the high expectations those results brought in 2019.

It now looks as though O'Connor has put his troubles behind him with a decisive solo move on the steepest pitches of the final climb of stage 4 of the French stage race on Saturday.

"What a ride by all the NTT Pro Cycling boys today," O'Connor said on Twitter. "We ripped the script up, fully committed to a mad plan and it paid off with the win. Cheers to all – I cannot explain how much of a relief it is to achieve this victory!"

"I really needed it," he said according to Direct Velo. "In a way, I had decided to start all over again this winter. Last year, after all of the troubles, I was wondering what would become of me... But this victory changes a lot. I can dream of new things now, work towards other goals. Because until now, I was lost and didn't know what I could do. I needed confidence."

The 24-year-old after two unsatisfying tries at the Giro d'Italia will not return to the race but instead aims to be selected for NTT's Tour de France team.

"It has been a while since I won," he said. "Last year I really struggled. Nothing was going in the right direction."

He had high expectations for the Giro but was emotional when he looked back at the race: "I tried to be good, but nothing worked. I crashed a lot, too..."

In France on Saturday, O'Connor played off a fine exhibition of team tactics under the direction of new manager Bjarne Riis and directeur sportif Gino Van Oudenhove. First Edvald Boasson Hagen and Michael Valgren attacked on the Col de Trélis with almost 50km to go, and, at the bottom of the descent, a group pulled away containing O'Connor, Valgren, Simon Clarke (EF Pro Cycling), Cofidis' Damien Touze and Kamil Malecki (CCC Team), and they worked to get a maximum lead at the base of the final climb.

"We decided to take the race in hand today [Saturday]. It was the plan to try something when it was steep," O'Connor said. "We put in a lot to get to the bottom of the last climb with a maximum of advantage."

As the climb went on, only O'Connor's compatriot, Clarke, was left and O'Connor knew he had to get rid of him.

"I knew Simon was probably faster than me. If I stayed with him until the top, I wasn't sure I could win. So I had to get rid of him."

Although O'Connor, who lost almost seven minutes in the crosswinds on stage 1, isn't a contender for the overall classification behind new leader Benoit Cosnefroy, he can revel in his victory and look forward to the season ahead.

"I am happy to have had incredible legs. We absolutely wanted to win and we succeeded in a show of strength," O'Connor said, taking time to thank his teammates. "Edvald [Boasson Hagen] gave everything for me; he worked hard. I did the same for him two days ago. Here, he did it for me. It is very special because he is a world-class rider."