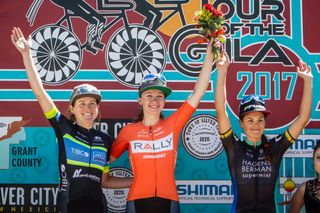 Lauren Stephens, Emma White and Lizzie Williams on the stage 4 podium at Tour of the Gila (Image credit: Jonathan Devich/epicimages.us)

Two of the biggest stage races in the United States will be live streamed on Cyclingnews in 2020.

CycleStream TV owner Leah Sturgis announced live coverage of the criterium stages of the Redlands Bicycle Classic and Tour of the Gila and video highlights of all other stages after successful pilot of live streaming for Redlands in 2019.

The Tour of the Gila was facing cancellation after 33 years on the calendar, but Sturgis stepped in with sponsorship from CycleStream TV and Wildlife Generation to help ensure the race would go forward.

"Gila is one of the most unique races in America, and plays an important role for teams like Wildlife Generation and others looking to develop top American talent. After seeing what our coverage of Redlands last year was able to do for the event, I knew we had to expand the model to other races," Sturgis said in a press release.

Tour of the Gila race director Jack Brennan said the livestream will allow the race to court more and larger sponsors across the state and region. "This partnership not only saves the race for 2020, but allows our organization to showcase Silver City and Tour of the Gila to partners across the state, and secure more broad funding to ensure the lasting security of the race."

Notable cycling commentator Brad Sohner will produce the live coverage with Sturgis as director, with Sohner and Dave Towle commentating on both races.

The coverage will include high definition cameras, aerial drone coverage, and on-board cameras and be broadcast live for free on Cyclingnews and on CycleStream TV.