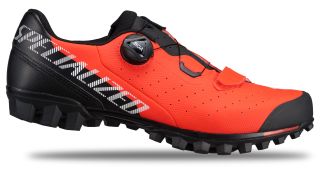 Recon 2 is the mid-range option and offers a great blend of value and features (Image credit: Specialized)

Specialized has launched a new range of its Recon shoes. This redesigned Recon moves away from a laced design to a more balanced trail shoe with either straps or securing dials.

The Californian cycling brand is marketing its new Recon range as an off-road shoe which is more comfortable to walk in, if you need to move about dismounted. If you seek a true all-round off-road shoe, the Recon has been designed especially for you.

A key feature for the new range is its rather originally named ‘SlipNot’ rubber compound, which has been moulded into quite an aggressive sole pattern. This should help keep riders stable and from slipping, when portaging off the bike, or hiking steep trail sections.

Specialized will be marketing three versions of the new Recon and it is not merely a question of weight and colourways, distinguishing the three derivatives. They each have a different fastening system.

The Recon 1 is Specialized’s most affordable offering in the new range, at £90, but also the lightest, weighing only 331g. This Recon has three Velcro straps for fastening and comes only finished in black, with sizes from 36-49.

Graduating to the middle of the range, with Recon 2, and you lose two of the Velcro straps for a dual-cable fastening system, controlled by a single Boa dial. This Recon is available in either black or red, weighs 357g and is priced at £158.

The only variant which is also available in half-sizes, Specialized is clearly anticipating the Recon 2 to be its volume seller, with full-sizes of 36-49 and half-sized in the 38-47 range.

Leading the new range is Specialized’s Recon 3, priced at £210. It adds a second fastening Boa and features a carbon-fibre sole, for optimal power transfer. This is the stiffest of these new Recon shoes and will be available in a size range from 36-49.