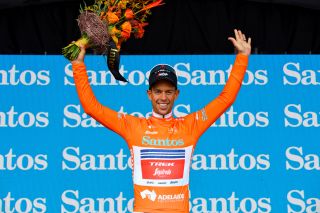 Richie Porte (Trek-Segafredo) in the ochre jersey as new leader of the 2020 Tour Down Under after stage 3 to Paracombe (Image credit: Bettini Photo)

Trek-Segafredo's Richie Porte was all smiles after taking the ochre leader's jersey following his victory on stage 3 of the Tour Down Under in Paracombe on Thursday.

The 2017 champion nevertheless still has defending champion Daryl Impey and Simon Yates breathing down his neck at the half-way point of the race, with the Mitchelton-Scott duo sandwiching third-placed Rob Power (Sunweb) and the top four overall separated by just 11 seconds.

"I would have liked to have taken a little more time on Daryl," Porte admitted, "but you've got to take the victories where you can, and I'll savour this one.".

Rohan Dennis: That was classic Richie Porte at the Tour Down Under

Porte escaped soon after what was left of the peloton took the right turn onto Torrens Hill Road with its 20 per cent gradient lower slopes. He opened up a decent gap that faded to five seconds by the finish, as the headwind took its toll, despite the considerable flattening-out of the slope as the line approached

"I think I lost a bit of time there in the last 300 metres, but it was nice to get the gap I did, and the guys were so good there for me, putting me in a fantastic position during what was a hectic run-in to the final," Porte said, praising his Trek-Segafredo teammates who rode for him so well.

"Some of these young guys are prepared to take much bigger risks than us older guys, but it was good to get into a good position there and it all went well."

Asked whether he'd won the race with his show of power – and the previous two winners at Paracombe, Porte in 2017 and Rohan Dennis in 2015, have both gone on to win the race overall, Porte denied that his six-second overall advantage over 2018 and 2019 Tour Down Under champion Impey was enough at this point of the race.

"Who knows? Historically, this has been the 'queen stage' when it's been in the race, but there are two more stages to go before Willunga Hill [stage 6], so the race is not over yet," he said.

"There are time bonuses on the road as well, and I expect that Mitchelton-Scott will go for them, but I'm happy to get the victory today for the team."

While Impey will try to pull back time thanks to the intermediate-sprint bonuses in the coming days, with additional ten, six- and four-second time bonuses available to the first three riders on each of the three remaining stages, Mitchelton also still have the Yates card to play.

It may be a case of 'advantage Porte', but the race really is a long way from over. Indeed, it will be a fight for every second. Porte will use every tactic he can to take seconds or take them away from his rivals.

"We've got fast guys like Kiel Reijnen and Mads Pedersen on the team, but I think we'll just take it one day at a time, and if that's how the race goes, then it's just how it is," said Porte of the fast-finishers' fight for bonus seconds, "and we're just going to have to do a good race at Willunga.

"Simon is a fantastic bike rider, and you don't like to see that," Porte said of Yates, who went down in the crash late on stage 2.

"I saw him after the crash, and he didn't look good. But he's class, and it's good for the race that he's still there and chapeau to him, as he did a super ride today."