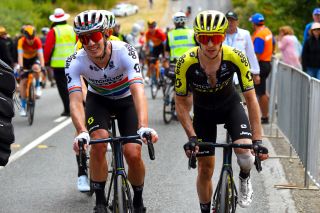 South African road race champion Daryl Impey and Mitchelton-Scott teammate Simon Yates at the finish of stage 3 of the 2020 Tour Down Under at Paracombe (Image credit: Bettini Photo)

Despite Richie Porte's stage win at Paracombe on stage 3 of the Tour Down Under on Thursday, which gave the Trek-Segafredo rider the race lead, Mitchelton-Scott sit ready to pounce with two riders – defending champion Daryl Impey and their climber Simon Yates – inside the first four overall.

The morning had dawned for the Australian WorldTour with uncertainty: would Impey be able to cling on to the race's best climbers on the steep, two-kilometre climb up to Paracombe and stay in contention for a third consecutive Tour Down Under title, and would Yates' left knee hold out, after the British rider crashed and injured it towards the end of stage 2 on Wednesday?

The response was emphatic: yes and yes.

The only way the day could have gone better was if Mitchelton-Scott had ended the day with the race lead for either of their riders, but their hopes of an overall Tour Down Under victory are still very much alive, and they'll fight until the very end of the race to give the Australian WorldTour team another home win.

The following two stages – Norwood to Murray Bridge on Friday and Saturday's fifth stage from Glenelg to Victor Harbor – provide Impey with more opportunities to gain bonus seconds both at intermediate sprints and on the line during what should be stages for the sprinters.

Then Sunday's final stage, with its two ascents of Willunga Hill, gives Yates a chance to take on Porte again, with the benefit of three more days' rest and recovery when it comes to his knee.

"It's hard to say if my knee injury affected me today. I just did the best I could," Yates told reporters at the finish.

"My knee was a little bit stiff in the morning, so I think it was a good thing that we didn't have a quick start up the highway there," he said. "But once we started to get into it, it started getting better and better."

Porte's decisive attack on the lower slopes of the final climb up to the Paracombe finish saw Impey and Yates scramble to mount a chase, having been dropped off in a great position thanks to strong work by their teammates in the gully during the lead-up to it.

"I could see during the climb that Impey was close as well, so I half did a job for him, and half did it for me," said Yates, who took third place on the stage – in the same group as riders including Rohan Dennis (Team Ineos) and George Bennett (Jumbo-Visma) – and is now third overall, 11 seconds down.

"Chapeau to Richie: he showed again that on these short little climbs he's a notch above," Yates added. "I think a longer climb like Willunga suits me more than today, and I think it'll also come down to what we do as a team as well, but we'll review today and go from there."

'We're in a great situation'

"I think it's a huge advantage," said Yates' teammate Impey of having both riders in a position to potentially win the race.

"Simon rode incredibly well today after yesterday's crash, and that was great to see. For me, personally, I think I did a good race. I always knew that it was going to be a challenge staying close to the guys up here, but I finished in the select group at the end, so I was pretty chuffed.

"I battled a bit on those bottom slopes, and then regained a bit of composure near the top, and just gave it everything I could to the line. That being said, I think we're in a great situation. Obviously we'd like to be in the leader's jersey, but there are still lots of bonuses to come and still many opportunities in the race," said Impey, who finished sixth on the stage and now sits second overall, six seconds down on Porte.

"We knew that Richie would be the one to beat up here, and he was too good for everybody. But the gap's minimal, and we'll just go back to our usual plan," said White.

He confirmed that the tried-and-tested tactic of winning bonus seconds through Impey and then trying to hang on to the likes of Porte on the climbs remains Mitchelton-Scott's plan A, with Yates ready to give chase, and ideally beat, Porte on Willunga Hill on Sunday, if necessary.

"Richie's in pole position," admitted White, "but we've been in this situation before, and Daryl's only at six seconds, so it means we have to win time bonuses, doesn't it?

"There's still a lot to play for, and, as I said at the start of the week, there's a lot of wind forecast for the next couple of days, so it'll makes things pretty tricky, I think."

White said that the team was naturally never going to put Yates at risk and allow him to start on Thursday's stage if he wasn't given the all-clear.

"We weren't going to push him through any pain or risk any long-term damage; our big picture is winning further down the track. The doctor was happy with the pain that Simon could deal with, and it was a good outcome. It was a big bonus for us that the pain was bearable for him today," he explained.

"I think injury-free, with two working knees, it would have been a bit easier for Simon, but he just got rolled in the last 30cm by Robert Power [Sunweb] for second place."

That result meant that Yates received only four seconds for third place, rather than the six-second bonus awarded for second place.

"But he's in a good place, and, big picture, the knee's better than we expected, and for the rest of the week there's still a lot to play for," White warned.