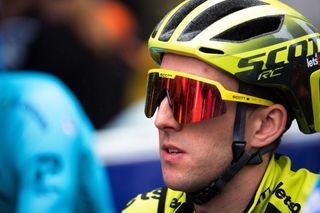 Simon Yates at the Tour Down Under before his stage 2 crash (Image credit: Getty Images)

Mitchelton-Scott endured what directeur sportif Matt White described as a "bittersweet day" at the Tour Down Under on Wednesday, with Daryl Impey finishing second on stage 2 to Stirling on Wednesday to collect six bonus seconds, while alternative team leader Simon Yates crashed hard in the final kilometres and was left with a nasty cut to his left knee.

Impey moved up to third overall, one second behind new race leader and stage 2 winner Caleb Ewan (Lotto Soudal) and has now accumulated nine seconds on his overall rivals. However, Yates struggled to ride to the finish after injuring his knee. He crossed the line over five minutes after stage winner Caleb Ewan but was given the same time because the crash occurred inside the final three kilometres.

While his teammates rode back to their hotel in central Adelaide, Yates was taken back in a team van, his left knee bandaged and with an ice bag applied to try to reduce any swelling. It is too early to understand what impact the injury could have on his 2020 season but his knee wound seemed similar to that Tom Dumoulin suffered at the 2019 Giro d'Italia.

"It was a bittersweet day for the team. Daryl got a good result and gained a few seconds but to lose Simon wouldn't be good. It's early days; it could be fine or it might not be," White told Cyclingnews, the concern clear to see on his face.

The Tour Down Under organisers said on social media that Yates had a 'gashed knee' but White preferred to wait for Yates to undergo checks and treatment before any decision on whether the British rider will start stage 4 on Thursday.

"He's not so good at the moment. He's lost some skin in as couple of other places but his left knee is the real concern. He could barely pedal to the finish line," White admitted.

"The doctors will make a decision on if he'll start tomorrow and we'll adjust our plan accordingly. It could swell up and with a bunged knee, you're not going anywhere."

Impey's satisfaction was muted at the Mitchelton-Scott team van but his hopes of a third consecutive overall victory are on track.

"I thought it would be tricky to get bonus seconds today but we put it all on the final sprint because this finish suits me, and we walked away with six seconds," Impey said.

"Nine seconds now is a nice gap on the climbers but there are still some good bike racers. A lot of guys have good form this year but I'd rather have nine seconds than none."

Impey knows that the Tour Down Under could tip in favour of the best climbers on stage 3 to Paracombe.

"Tomorrow [Thursday] is going to be a difficult day. It's pretty much the 'queen stage'. You can lose nine seconds easily, so it's about going to the line and limiting the losses," he said.

"The finish is the same as when Richie Porte annihilated everyone a few years ago [2017]. I'm in much better shape than last time I did it, so I'll give everything I can and take it from there."

Simon Yates has crashed in the finale of Stage 2 at the TDU. Director Matt White says he banged his knee hard and will be assessed properly tonight. No certainty to start Paracombe tomorrow. pic.twitter.com/6usRWraohLJanuary 22, 2020