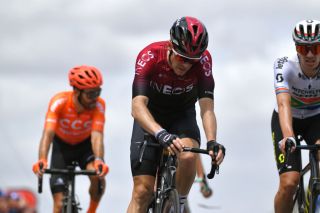 Team Ineos duo Rohan Dennis and Dylan van Baarle were on Richie Porte's wheel when he launched his attack and surged away to victory on the climb to the line at Paracombe on stage 3 of the Tour Down Under on Thursday. However, they didn't jump after him, pacing their effort and leading a sustainable chase so they could limit their losses.

Dennis finished fourth at five seconds, with Van Baarle in the same time in seventh. Teammate Pavel Sivakov was not far behind, finishing 21st at 23 seconds, and taking the best young rider's jersey despite some confusion about the age limit for the white jersey competition.

Dennis was complimentary of Porte's attack, but refused to accept defeat in this year's Tour Down Under. Porte lost time in the final section of the climb to the line into the strong headwind, and so only gained five seconds plus the 10-second stage winner's time bonus. He now leads Daryl Impey (Mitchelton-Scott) by six seconds, with Rob Power (Team Sunweb) third at nine seconds. Dennis is ninth at 15 seconds and Van Baarle is one place behind in the same time.

"That was classic Richie at the Tour Down Under," Dennis told Cyclingnews in admiration. "We were able to bring him back near the end but his initial kick, at this time of the year, is impressive. We were on his wheel but he kept going and going."

Dennis also looked for the positive aspects of the day.

"We nearly caught him at the line. That gives us confidence for Willunga Hill, that we can slowly pull him back and potentially get him back. At least potentially," he said.

"Richie and Trek-Segafredo have got to control the race now. I was fourth and Daryl [Impey] was sixth; we were only a few seconds behind him. I suspect Richie will lose the jersey before Willunga Hill and then it'll again be a battle of the time bonuses. I think with finishes in Murray Bridge and Victor Harbor [on stages four and five], the wind could be a big factor and the ochre jersey is still up for grabs. Impey will target them for sure, and so it will come down to a really big showdown on Willunga as normal."

Dennis was happy when he chased back to the peloton after a late puncture on stage 2 and then still felt strong. The rolling Adelaide Hills were relentless on stage 3 and so he rode more cautiously, knowing that early season form can be very fickle.

"I wasn't feeling too good today so I took a step back and tried to use as little energy as possible, and give it everything on the climb and take each pedal stroke as it came. I really had to play mind games with myself, and I had to just try to save energy where I could. But it was a hard day, and so the outcome is a confidence boost ahead of Willunga."