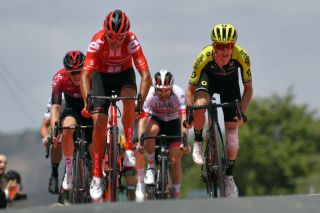 Rob Power (Sunweb) pips Mitchelton-Scott's Simon Yates for second place at the finish of stage 3 of the 2020 Tour Down Under in Paracombe (Image credit: Getty Images Sport)

Robert Power (Team Sunweb) was back to his best on the uphill finish to Paracombe on stage 3 of the Tour Down Under on Thursday, leading home the chasers behind stage winner Richie Porte (Trek-Segafredo) and moving up to third overall, nine seconds behind the new race leader.

Power is still only 24 but has fought back from the rare bone marrow oedema syndrome that delayed the start of his professional career with Orica-GreenEdge in 2016. He finished second at the 2014 Tour de l'Avenir and won a series of prestigious races as an under-23 rider in Italy, but was forced to wait until the Tour of Britain in September 2016 to kick off his professional career.

After winning the Japan Cup in 2018, Power moved away from Mitchelton-Scott's protective Australian cocoon to join Team Sunweb in 2019, and rode both the Giro d'Italia and the Vuelta a España last season, helping Wilco Kelderman finish seventh overall in the latter.

He was tipped for success after his prodigious early success, and showed he's back to his best during the fight for position on the run-in to Paracombe, and then the uphill sprint in pursuit of Porte.

"I've worked really hard in the off-season this year, so I knew I was coming here in good form," Power said, modestly.

"All the guys did awesomely today. Jai Hindley had a crash yesterday and the guys said, 'Rob, if you want, have a go,' so I got to the bottom in a good position and then just tried to do my best from the bottom to the top."

It's clear that Power has positioned himself in the fight for overall victory and a place on the first WorldTour podium of the 2020 season. He can perhaps fight for the important time bonuses in the remaining stages, and then try to be there on Willunga Hill on the final stage, where Porte is expected to attack yet again.

"We're going to have to wait and see, as it's still a long race," Power said of his overall ambitions.

"Richie looks good, but I think we're going to give it a good crack. All the boys are motivated, so yeah, I'm keen to get into the racing."