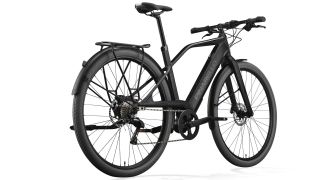 Pinarello has revealed its 2021 model year bike portfolio and there is a nice surprise for cyclists looking for a great commuter bike.

The Italian brand’s high-performance carbon road bikes continue to steal the show with their striking design aesthetic, yet an interesting addition to Pinarello’s product line-up is the eTreviso, described as an urban electric bike. This is the Italian brand’s debut e-commuter and expands the battery-assisted offering from Pinarello, which already tallies the Nytro electric road bike and Nytro gravel bike models.

Best commuter bikes: Our pick of the best bikes for your commute

The eTreviso’s hydroformed aluminium frame has an elevated chainstay, internal cable routing and fenders, whilst there is also a sturdy yet elegant rear pannier rack.

Delivering agile steering and a light front end, which should be easy to pick-up over urban road features, Pinarello has equipped the eTreviso with a carbon-fibre fork. Securing its steering stability, especially over poor road surfaces, is a 100x12mm thru-axle.

Tyre clearance on the eTreviso is generous, allowing for a 700c casing of 2in width, whilst 160mm rotors spin on both hubs, actuated by hydraulic brakes, ensuring confident deceleration in all weather conditions.  The bike’s Shimano Deore 1x drivetrain also promises durability and low running costs.

Battery assistance and electric motor cadence on the eTreviso is provided by Germany system specialist, Fazua. Its Evation e-bike system weighs only 4.6kg and delivers 250w of peak power, whilst disengaging at speeds above 25kph.

Pinarello is offering its eTreviso in three different frame options – S, M and L – with geometry that is specific to size.

Head angle values are graded as 71°, 71.5° and 72°, whilst the corresponding seat angles set at 74°, 73° and 72°. Reach numbers are 385-, 400- and 425mm for the three eTreviso frame sizes, which should deliver tidy cruising stability and predictable commuter bike handling dynamics.

As befits a considered e-commuter bike, the eTreviso is fitted with front and rear lights, drawing directly from the main lithium-ion battery pack.

Pinarello is marketing the eTreviso at £4000.