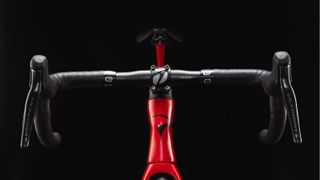 Pinarello has today announced not one, but two new bikes. The Prince, Pinarello's more-budget-friendly race bike, is given an overhaul as we transition into model-year 2021, and an old name, Paris, is reintroduced to the line up as Pinarello's latest endurance bike.

With the new bikes come a new set of geometry charts, with both models given nine sizes ranging from 43cm to 60cm. However, the standout addition here is the compression of options in the middle-spread of sizes. The centre of the bell-curve that comprises the majority of riders requirements sits, according to Pinarello, between 51.5cm and 56cm frames, so to offer a more accurate sizing, Pinarello has made smaller jumps via 53cm and 54.5cm frame sizes.

Both see swathes of trickle-down technology and application of learnings found during research when developing the Dogma F12, and are both treated to Pinarello's asymmetrical frame shape, Flatback tubing, Onda fork and stay design, and concave down tube design.

The Prince is available in two different frame material specifications and while available in both disc and non-disc brake models internationally, we're told it will be disc-brakes-only for UK customers.  The main updates include an increase in tyre clearance from 25mm to 28, improved aerodynamics and the introduction of integrated cable routing thanks to new components from Most, Pinarello's components subsidiary.

The four models available are:

Both iterations of the Prince will be constructed from Toray T700 carbon fibre with a unidirectional finish that Pinarello claims enabled them to save weight. The Prince FX is specced with a higher modulus carbon fibre, given T800 in a 3K weave. Frame weight is unquoted for both.

All four models share a geometry chart, however, this has been updated for 2021 and now sits somewhere between the outgoing Prince and the brand's thoroughbred race bike, the Dogma F12.

The Prince undoubtedly shares traits, genes and DNA with the Dogma F12, but Pinarello states that for 2021, the aim was to create a family of pure race bikes that is less aggressive in geometry. The new Prince now has a higher stack and a slightly shorter reach than the outgoing model.

As has become the theme of recent bike launches - and a trickling of technology down from above - the new Prince is given an integrated cockpit and Pinarello's TiCR (Total internal Cable Routing) system, which threads cables inside a new Most Jaguar handlebar, and directly into the front of the new Most Tiger stem. Should a bar or stem swap be required, an entire re-cabling of the front end will be required, however, the system does utilise splittable headset spacers to simplify position adjustment. It also guarantees compatibility with Most's one-piece Talon Ultra.

According to Pinarello, TiCR allows for an 85-per cent reduction in cable and wire aerodynamic drag, with the remaining 15 per cent affected by the short housing portions exposed externally on the frame.

With the introduction of internal cables, Pinarello needed to increase head tube size, and has taken the opportunity to improve the shape's aerodynamics.

In fact, the head tube is one of many tube shapes that have been overhauled for 2021, the Prince has been given updates almost throughout. In addition to new seat stays, chain stays and fork blades, Pinarello has widened the down tube to match that of the Dogma, but adapted the shape by downsizing it in a vertical plane by 3mm. Thanks to this, Pinarello claims to have retained the same lateral stiffness and power transfer efficiency of the former Prince, whilst also improving vertical compliance for increased comfort. With this updated down tube and the bottle-hugging concave shape, Pinarello has also updated the shape of the bottom bracket to allow the seat tube bottle to sit 5mm lower.

At the back of the bottom bracket, chain stays have been given a squarer profile which Pinarello claims to have increased stiffness by 10 per cent. They have also been widened to allow tyres of up to 28mm to be fitted, although Pinarello admits this is a conservative figure with an overall gap of 37.5mm.

Throughout, the frame reads from the Pinarello playbook and borrows the Dogma F12's aggressively asymmetric design, claiming that the increased stiffness on the drive-side of the bike helps to better account for the increased forces applied through the drivetrain. To the same end, Pinarello has applied a similar solution to the forks on disc brake models, increasing the size of the non-drive side fork blade to account for braking forces, whilst giving it the signature Onda shape which is said to improve vibration absorption from the road.

Based around the Gan K, the Paris is undoubtedly positioned as an endurance bike, but still takes heed from the brand's racier models, including Onda forks and seat stays, aerodynamic cues throughout, and further exaggerated asymmetry. It is claimed to embody the brand’s racing DNA, whilst offering a stable and comfortable ride.

There is just a single option when it comes to material, with the Paris frame being constructed from a more-budget-friendly unidirectional T600 Toray carbon fibre. Frame weight is quoted at 980 grams for a 53cm.

Tyre clearance is rated at 30mm, which again is a conservative recommendation from Pinarello with a total of 42mm of real estate to play with at the chain stays and even more - 45mm - at the forks.

If the geometry charts are accurate, then the geometry on the endurance Paris is only a touch less aggressive for the Paris, with both the stack being just 1mm different, and reach is within 3mm.

Pinarello argues that the culmination of marginal gains is greater for a bike that will ride longer distances, so puts equal emphasis on aerodynamics for the Paris. According to Pinarello, the Paris  'applies a whole series of aerodynamic precautions', although it fails to go into a great deal of detail as to what that entails. However, the two that are mentioned include ForkFlaps, and FlatBack tube shapes on the down tube and seat tube.

In addition to aerodynamic optimisation, tubes are individually optimised to offer a blend of stiffness and compliance where needed. The down- and head tubes are said to be oversized to offer optimal power transfer, while the seat stays and top tube is narrow in order to improve flexibility for increased comfort.