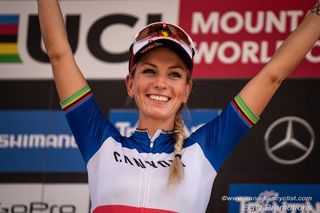 Pauline Ferrand-Prévot has made a public statement regarding Marion Sicot, the rider who admitted to using EPO in an exclusive interview with Stade 2 and requested a reduced suspension alleging that her decision to purchase and use the drug happened after she experienced months of psychological harassment and abuse by Doltcini-Van Eyck team director Marc Bracke.

Ferrand-Prévot, the reigning mountain bike world champion, has said that she doesn’t want to be misunderstood, that Sicot’s situation is delicate but that there is something that is unsettling about her testimony in the interview with Stade 2.

"Attention, post that requires concentration!" Ferrand-Prévot wrote in a post of Facebook. "Because I don’t want what I say to be misunderstood. And the subject is delicate. But since I’m not well versed in doublespeak, and am more the type to say what I think, I admit there’s something that unsettles me about the recent revelations from Marion Sicot concerning her reasons for doping. But it’s complex."

Sicot tested positive for EPO in a test carried out at the French time trial championships on June 27, 2019. She finished tenth in the time trial and then ninth in the road race. She was due to ride the La Course by Le Tour de France but pulled out after being notified that EPO had been founded in her A sample.

In her interview with Stade 2 on Sunday, however, Sicot admitted to Googling 'purchase EPO’ and then buying ten vials of the substance through a Chinese website in May 2019. She said she took the drug on June 24. She said that her decision to do so came after months of psychological harassment and abuse from her team director Bracke.

Stade 2 obtained a series of text-based messages between Sicot and Bracke, that show Bracke requesting front and back photos of her in a bikini. He also asked her to keep it a secret. Sicot said that Bracke requested these images every Monday beginning in November 2018 to keep track of her weight.

Both the UCI and the French Federation have opened investigations into Bracke and the Doltcini-Van Eyck team.

"If harassment from her team director is established – and that’s the subject of an inquiry from the French Cycling Federation, which you can’t accuse of doing nothing – by the UCI, then he should clearly be condemned," Ferrand-Prévot wrote.

"A woman has the right to say no if a demand seems inappropriate. She must not have fear of reprisals – sporting or personal. That has been said and, if needs be, I will repeat it."

Ferrand-Prévot said that what unsettled her about the testimony was concerning Sicot’s doping confession. She said that athletes alone is responsible for what is put into their bodies. She compared Sicot’s testimony, which blamed her actions on the abuse and psychological harassment she said she received at the hands of Bracke, to that of Richard Virenque. The French climber was one of the central figures in a widespread doping scandal, Festina Affair, in 1998.

"Beyond that, what bothers me is that, even if there are explanations, we are still wholly responsible for our decisions, for our actions," Ferrand-Prévot said. "Richard Virenque became the caricature of the doped cyclist with his ‘à l’insu de son plein gré’ [a comical phrase created to capture his denials of doping, roughly translating as ‘unbeknown to my free will’ - ed.], and we’re not far off that here.

"Going onto the internet to get hold of EPO, buying it, receiving it, finding out how to inject yourself, denying it – that’s not [being] neutral. So yes, it bothers me that the editing of the report leads you to believe that the cause of these actions ultimately falls on someone else."

Ferrand-Prévot goes on to suggest that many athletes undergo difficulties, ups and downs, and suffer under pressure both mentally and physically, but do not resort to taking banned substances.

"What high-level athlete hasn’t encountered hard times, doubts, suffering, at some point in her career? You don’t resort to doping for all that. You can’t fight against doping and not react to this account. Because doping must never be seen as a solution – otherwise there is no more sport, no more sponsors, nothing."

Ferrand-Prévot also said that it bothered her that the reporting of Sicot’s testimony regarding her decision to dope - in combination with a request for reduced sanctioning because of her allegations of abuse at the Doltcini-Van Eyck team - has made it appear that she is a female sympathetic figure despite the fact that she chose to purchase and use EPO.

"And I ask myself if it’s precisely because Marion Sicot is a woman that the affair comes out in a sympathetic context, that she’s placed in this infantilised position. And that, that annoys me. I’m often asked to step in to represent women’s cycling, but my demand is, above all, to be considered as a high-level athlete, a sportsperson, someone who dedicates her life to her passion. But also as someone who must accept her faults. Are we talking again about my Olympics in Rio? In the end, that was the most enriching (and also the most difficult) experience of my sporting life.

"Since I was little, I’ve fought against this notion of the ‘weak woman’. And I’ve told myself that such a notion can make victims of women cyclists. Yet, I don’t see myself like that at all. We have the right to take responsibility for what we’ve done, fully, whether it’s good or bad. At a push, it’s even our responsibility.

"When we can all do that – accept our successes as well as our failures – then, in my opinion, we will have achieved a strong notion of equality. Two days after International Women’s Day, that could make some sense."