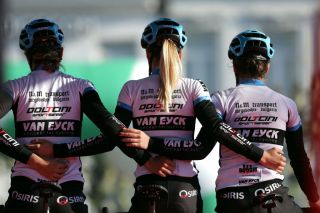 The UCI has opened a formal investigation into Doltcini-Van Eyck Sport women's team after two riders alleged abuses with in the team. According to a report in Le Monde Saturday, Canadian Maggie Coles-Lyster alleged sexual assault by a team assistant in 2017 and American Sara Youmans alleged inappropriate conduct by team director Marc Bracke during her contract negotiations in 2019.

"The UCI has been informed by the Ethics Commission of the opening of a formal procedure. The latter, led directly by the Commission, is under way," a representative of the UCI confirmed in an email to Cyclingnews on Saturday.

The formal complaint is centered around Youmans, 24, who filed her complaint in October. She told Le Monde that during her negotiations to join the Doltcini-Van Eyck Sport women's team Bracke requested that she send him images of herself "in panties and bras". Le Monde viewed the exchanges of messages and reported that Bracke asked Youmans to send him photos in a bikini and told her "Don't be shy ... This is the start of a relationship of trust."

Youmans was offered an unpaid contract but she told Le Monde, "I didn't want to put myself in a dangerous situation, having no friends or family in Europe. If he was ready to behave like that on the Internet, I was afraid of being in a training camp, where the balance of power would have been in his favor."

One other rider, who requested to remain anonymous told Le Monde she had a similar request from Bracke when she applied to race for the team.

Le Monde reported that some of the cyclists said Bracke had an authoritarian management style and to contradict him led to provisional suspension or dismissal from the team. None of the other cyclists reported sexual harassment or inappropriate behaviour by Bracke.

Cyclingnews reached out to Bracke by phone for a comment, however, he did not respond to our detailed message before the publishing of this story.

This is the second known formal investigation into a Belgium-registered women's cycling team from 2019. Cyclingnews was the first to report that the UCI had received multiple formal complaints of abuse against HealthMate-Cyclelive manager Patrick Van Gansen. The UCI Ethics Commission has hired an external agency, Sport Resolution, to investigate that case due to its high demands that included the seriousness of the accusations, the complaints that span several years, and because there are a large number of people involved.

Coles-Lyster, 21, joined Bracke's programme in April of 2017 when it was under title sponsors Lares-Waowdeals. She had just turned 18 and still a junior rider, and was contracted for one year as a development rider with the intention of competing in some of the one-day races in Belgium. She told Le Monde that during her first one-week stay in Belgium, she was sexually assaulted by the team's assistant who also worked as the soigneur.

"We were all between 16 and 18 years old. It was my first massage with him," Coles-Lyster told Le Monde. "He climbed up my legs, very high, and ran his finger over my vagina all the way. I was wearing [underwear], it wasn't on my skin, but it seemed like a strange practice to me."

Coles-Lyster said that the sexual assault was repeated during massage sessions throughout the following days that she was with the team. She told Cyclingnews that she stayed with the team for just under a week before travelling back to Canada to finish her last semester of high school.

She said that it was difficult to communicate with her teammates because of a language barrier but that through small exchanges with them she learned that they also experienced the same massages that pushed up to the vaginal area.

"I was uncomfortable but I did not want to pass for the one who complained when I had just arrived, that it was my first opportunity in Europe," Coles-Lyster told Le Monde. "He started taking pictures of me during group meals and sending them to me. He would take me by the arm before the races, send me more intimate messages."

Coles-Lyster told Cyclingnews that she eventually confided in her parents about the sexual assault. She also told Cyclingnews and Le Monde that she emailed the team's sports director Marc Bracke, 51, and told him that she felt uncomfortable with the assistant, that he had overstepped his boundaries and that she did not want to live in the same team housing as him or receive massages from him. She did not describe the sexual assault to Bracke.

Bracke told Le Monde that he asked the assistant to distance himself from the athletes on the team. Coles-Lyster said Bracke told her he spoke with the assistant about the raised concerns, and to "not be afraid of him". However, Coles-Lyster's discomfort surrounding the massages and living in the same team housing as the assistant were not addressed and she felt that her initial complaints were brushed aside.

Le Monde reported that there were further complaints from riders on the team about the same assistant but none felt comfortable enough to explicitly described sexual assault to Bracke. After the additional complaints, however, the assistant was then dismissed from the team in July.

Coles-Lyster currently competes on the road with the American team DNA Pro Cycling and races on the track with the Canadian national team.

"I was 18 at the time and I really just didn't know what to do," Coles-Lyster told Cyclingnews. "It took a long time for me to come to terms with what happened. I was young, naive and innocent. By coming to terms with it and understanding what happened - part of it being youth - it's awful for this to happen to anyone but especially a junior who has very limited worldly experience, and that is the hardest part.

"It's also your career on the line. You have a fear of being someone who brings up issues and as a female cyclist it feels like there is so much on the line and you feel like anything you say or do could jeopardize that."

Coles-Lyster said that she is considering filing a formal complaint after learning that the soigneur is currently working with another women's cycling team. "This is an issue that too many people are unaware of and it is happening in cycling and it needs to be addressed now before more people become victims," she told Cyclingnews.