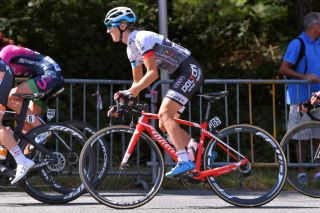 French rider Marion Sicot has responded to reports she has tested positive for EPO, claiming that women have higher level of EPO during their menstrual cycle.

Sicot's case emerged on Friday in French newspaper L'Equipe, with the article pointing out that Sicot was coached by Franck Alaphilippe, who also coaches his cousin Julian Alaphilippe and was recently hired by Deceuninck-QuickStep as part of Alaphilippe's contract extension.

Sicot, who rides for the small Belgian Doltcini-Van Eyck Sport team, reportedly tested positive for EPO in a test carried out at the French time trial championships on June 27. She finished tenth in the time trial and then ninth in the road race. She was due to ride the La Course by Le Tour de France but pulled out after being notified that EPO had been founded in her A sample.

If the test confirms the presence on EPO and Sicot if found guilty of doping, Sicot faces a four-year ban from competition.

Sicot confirmed the news of the test to the Directvelo website and revealed that she is awaiting the testing of her B sample, which should be carried in the next ten days. She insists she has not done anything wrong.

"I just want to say that I am innocent," Directvelo report Sicot as saying.

"I am now waiting for the analysis of sample B. I haven't done anything wrong. The level found is very low. I had my period when I was test and the tester made a note. When we have our period, women produce more EPO.

According to the Le Monde newspaper, the director of the French anti-doping laboratory Michel Audran described Sicot's claims as "quite fanciful". He pointed out that the EPO anti-doping test can detect the difference between endogenous EPO and exogenous EPO.

Sicot told L'Equipe that she stopped working with Franck Alaphilippe after the French National Championships, where the test occurred.

"That's got nothing to do with the test. Franck joined Deceuninck-Quick Step and so couldn't look after me anymore," Directvelo report her as saying.

She told Le Monde that she only met with Franck Alaphilippe once, with their coaching done remotely via an email exchange of power data and training plans.

L'Equipe said they tried to contact Franck Alaphilippe on Thursday but without success.