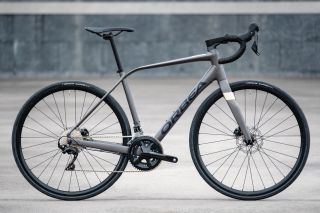 Following on from the release of the new range-topping Orca earlier this week, Spanish bike manufacturer Orbea has unveiled its updated Avant, aiming for the title of best budget road bike.

The big news with the new Avant is the complete change in frame material as what was once carbon is now aluminium. All five models of the Avant feature an aluminium frame, though still employs the carbon fork for a more supple touch when cornering.

With the move to alloy, prices have come down too, making the Avant far more affordable than it was previously.

Components are provided by Shimano throughout the range, from the 105 groupset to Tiagra and Claris. Of the five models in the range, three come with disc brakes, with two options (featuring Shimano 105 and Sora) available for those who prefer rim brakes.

All three disc brake models – the H30-D, H40-D and H60-D – feature internal cable routing too, with the cables entering the frame underneath the stem, just like the Orca.

This year, the Avant gets a slick new look too, to go with the move to aluminium. The sloping top tube now features a kink towards the seat tube, along the lines of a Canyon Inflite or original Specialized Diverge, though not as pronounced.

Finishing kit includes Orbea's own wheels – R1800 for the rim brake models and Corsa for the disc models, with Selle Royal or Prologo saddles also on offer.

The Orbea Avant is available now from Orbea.