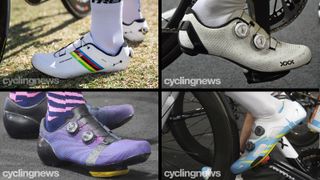 As the first WorldTour outing of the season, the Tour Down under is regularly a hotbed for new tech.

Sometimes that comes merely in the form of fancy new colour schemes, such as the Allez Sprint Tour Down Under collection or Vivani's European-champ-themed De Rosa. Other times, it can be the first public appearance for some of cycling's more progressive tech releases, such as last year, when saw the first public outing of Campagnolo's 12-speed groupset.

Tour Down Under Tech Gallery

This year, footwear seems to be the theme. Rapha, Bontrager and Mavic all have new kicks on show, and our eagle-eyed tech team have been on hand to sneak some photos.

Below, we run through what's new for 2020, plus we've thrown in a few extras that have caught our eye, just because we're cyclists and new shoes are our Achilles heel.

A few of the EF Education First riders have been seen sporting some new blue, black and purple kicks from Rapha.

Up close, it looks as though they have a narrow form, a fabric weave construction, a plastic external heel cup, and a double-Boa retention system.

Neilson Powless, who's been using them for five days, had positive things to say.

"They've been working out really well, I came from Shimano and those are really comfortable shoes as well, but I've been really digging the Rapha shoes. They are pretty narrow, but my feet are also narrow, so I'm always after that anyway."

As we recently reported, Romain Bardet, Mavic and VeloKicks have combined to raise money for the bushfire relief, following the devastating bushfires here in Australia.

With that partnership, Romain Bardet's repping a pair of yet-to-be-announced Mavic shoes, that are an updated version of the hyper-expensive two-part Comete Ultimate shoes.

Cyclingnews understands the official name of the updated kicks will be the Comete Ultimate II, and having had a brief look at the shoes in the big white tent of the TDU, we've noticed a few subtle changes.

The exoskeleton looks largely similar, with the main difference coming in the form of a greater hole on the instep. The inner bootie looks to be redesigned, and according to Bardet, there's a greater focus on airflow.

Mads Pedersen, while politely informing us that we, along with most of the cycling world, are pronouncing his first name wrong — it's pronounced without the 'D' — showed off his new kicks for our new series of 'Full Kit Overview' features.

The new shoes are an update to the Bontrager Ballista road shoes. Pedersen's shoes hold the same design as the recently launched Ballista Knit, but without the knit construction.

Of course, being world champion, Pedersen's shoes get the custom treatment. With the rainbow stripes down the in- and out-step, along with a nifty rainbow Boa - a rainBoa, if you will.

Porte explained the shoes were designed to offer greater ventilation, and if we were to speculate, we'd guess the slippery dimpled surface could offer aerodynamic gains.

We're unsure if these will become publically available, or whether they're a Porte-only prototype. Either way, we're excited to find out.

We've already covered the S-Works 7 Tour Down Under collection, but they are just too pretty to leave out. The blue and yellow really pops in the Australian sun

No roundup of WorldTour shoes would be complete without Adam Hansen's custom carbon kicks.