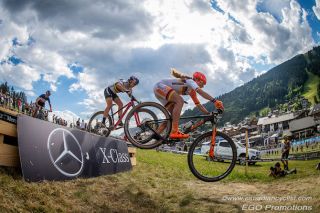 Elisabeth Brandau and Kate Courtney at the Les Gets World Cup in 2019 (Image credit: Rob Jones)

The COVID-19 pandemic continued to chip away at the remainder of the 2020 Mercedes-Benz UCI Mountain Bike World Cup, with the Lenzerheide, Switzerland and Les Gets, France rounds scheduled for September cancelled by the organisers, the UCI announced on Tuesday.

The only cross country race left on the calendar is the double round in Nové Město in the Czech Republic from September 29-October 4, while downhill has two: Maribor, Slovenia and Lousã, Portugal in October before the planned UCI Mountain Bike World Championships in Leogang, Austria from October 5-11.

The coronavirus pandemic has led to mass cancellations of cycling events across all disciplines, with a shortened road season beginning in late July. However, travel restrictions set in place by some countries are hampering athletes from getting to some races.

2020 Mountain Bike Worlds in Albstadt cancelled due to coronavirus pandemic

The upcoming Sibiu Cycling Tour in Romania, a UCI 2.1-ranked stage race, announced that the Memil Pro Cycling team from Sweden had to cancel its participation for this reason.

Many riders from the United States have been prohibited from travelling to Europe to race unless they had secured long-term stay visas or residency in a European country before the pandemic.

The UCI stated that the 2019 world champions in disciplines for which the 2020 Worlds are cancelled can continue to wear their rainbow jerseys until the next edition.

"Spring has been very difficult for cycling, but we are finally seeing the light at the end of the tunnel with the first road races taking place in July and the resumption of the UCI WorldTour and UCI Women's WorldTour expected in August," UCI President David Lappartient said.

"However, as we have always said, the restart of the season, whatever the discipline, will depend on the evolution of the health situation in the organising countries. Several competitions scheduled for the second half of the year 2020 had to be cancelled because the conditions for their good organisation were not met. This may mean that the UCI World Championships in some disciplines will not be held this year. This is a great disappointment, but the health of the athletes and all those involved in our events, or simply present at them, is our top priority."