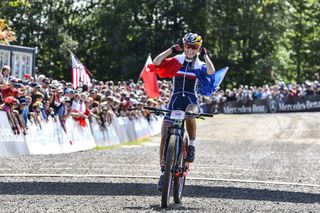 The UCI announced Friday that the 2020 Mountain Bike Cross-Country World Championships will move to Leogang, Austria, and held in conjunction with the downhill and pump track world championship events that were already scheduled from October 5-11.

"The UCI applauds the decision of the organisers and the Austrian National Federation for cycling and is delighted to be able to maintain the 2020 edition of the discipline’s leading annual event," read a press release. "It underlines that the health of the athletes and all parties concerned remain the overriding priority, and that all necessary measures will be taken in this regard."

The UCI was forced to postpone the Mountain Bike Cross-Country World Championships due to the COVID-19 coronavirus pandemic. The Worlds were originally scheduled to take place in Albstadt, Germany from June 25-28, which was earlier than usual to avoid a clash with the Tokyo 2020 Olympic Games. The Games have now been postponed until 2021.

In addition to the postponement of the World Championships, the sport governing body also had to postpone rounds of this year's Mercedes-Benz UCI Mountain Bike World Cup Calendar.

After consultation with stakeholders within the discipline, the UCI has also announced a revised World Cup calendar that will include four rounds for cross-country and six round for downhill between September 5 and November 1.

The World Cup calendar will open with the Lenzerheide, Switzerland on September 5-6 and move on to Val di Sole, Italy on September 12-13, Les Gets, France on September 19-20, Nove Mesto na Morave, Czech Republic from September 29-October 4 (for two rounds).

It will then move to Maribor, Slovenia on October 15-18 and Lousa, Portugal from October 29 to November 1, both for downhill only and for two rounds each.

The series was initially scheduled to include ten rounds; six for cross-country Olympic/cross-country short track, eight for downhill, however, as a consequence of the pandemic, four organisers were obliged to cancel their event: Losinj (Croatia), Fort William (Great Britain), Vallnord Pal Arinsal (Andorra) and Mont-Sainte-Anne (Canada).

"The new calendar, which spreads from next September to November, comprises six destinations, of which three will host two rounds. The UCI would like to acknowledge the mountain bike community’s spirit of cooperation which made it possible to establish a solid and attractive calendar in such a short time, despite the difficult situation," read the press statement.

The points awarded at two weekends of the UCI World Cup during the 2021 season will be added to those taken into account in the ranking of 3 March 2020. The weekends are still to be determined and will be communicated at a later date.

The UCI also announced the details for BMX and BMX Freestyle along with further details for the Olympic and Paralympic qualification system for Tokyo 2020.

The sport governing body had already announced the revised men's and women's WorldTour calendars on May 5.  The dates of the other categories of events in road cycling will be announced by May 20.

The UCI stated that it is now working with partners Flanders Classics and in collaboration with the different organisers on the UCI Cyclo-cross World Cup for the 2020-2021 season.

"It is another step, after the announcement of the professional road cycling calendars, towards a resumption of the cycling season from this summer. The confirmation of the Olympic and Paralympic qualification systems will also make the future clearer for our athletes, who will be able to move forward with their training and competition schedule with a view to the Tokyo Games next year.

"Our calendars remain dependent on the international health situation, but we are moving in the right direction, and I thank the cycling family that has again demonstrated its sense of responsibility, its solidarity and its courage in these times that are extremely difficult for everybody."