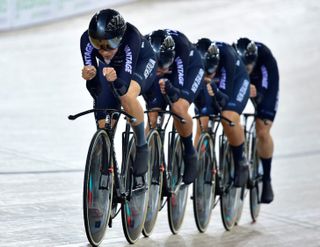 The experienced Rushlee Buchanan (front) will lead members of the New Zealand endurance track squad at the 2020 Women's Tour Under as the Vantage Cycling NZ team (Image credit: Guy Swarbrick)

"It's a good chance for some of our track riders to have a short rebuild as they prepare for what will be a massive next six months for some of them," said Cycling NZ women's endurance assistant coach Alex Greenfield, referring to the Olympic Games in Tokyo, "and it's a rare opportunity outside of Europe for young riders to experience a stage race against many of the best riders and teams in the world."

Buchanan is a four-time national road race champion, and also won the national time trial title in 2016. Her former road teams include US squads Team Tibco and UnitedHealthcare, and the experienced 31-year-old will lead a mix of youth and experience on the South Australian roads from January 16-19.