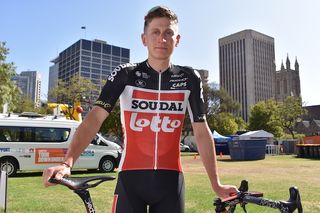 Matt Holmes will make his WorldTour debut for Lotto Soudal at the 2020 Tour Down Under (Image credit: Ellis Bacon)

Matt Holmes will make his WorldTour debut for Lotto Soudal at next week's Tour Down Under, and, according to team directeur sportif Herman Frison, the British rider will get an opportunity to show what he can do as soon as Thursday's hill-top finish at Paracombe on stage 3.

"Matt's new, but he's a bit of a climber, so I've told him he's not to try to do too much work before that first climbing stage," Frison told Cyclingnews this week. "We'll try to take him to the bottom of the climb in a good position, and then we'll see what he can do.

"Whether he finishes in the top 10 or the top 20, it doesn't matter; there's no pressure. But it's a chance. When you're 26, and you're coming from a smaller team, we're happy to give you a chance, so we'll see.

"Being here is an opportunity for him to learn," said Frison, "and if he finds himself in a good position on the GC, we'll work for him for the last few days. But if he doesn't go so well, no problem; he'll then just work for [sprinter] Caleb Ewan after that."

When Cyclingnews asked Holmes what he expected of himself, the 26-year-old from Wigan remained humble, despite the team's offer to see what he can do once the road heads upwards on Thursday.

"I'm not really certain; I've never raced so early in the season, so I don't know what my form will be like," he said. "It's great that they're going to give me an opportunity at my first-ever WorldTour race. It's pretty amazing – especially with Caleb in the team."

While Holmes' WorldTour debut will officially come on stage 1 of the Tour Down Under on Tuesday, the racing kicks off with a central Adelaide circuit race – the Schwalbe Classic – on Sunday.

"I've done my fair share of criteriums from racing in the UK," smiled Holmes, who joined Lotto this year following six seasons with British Continental outfit Madison Genesis, "so hopefully I should be all right in that. I'm actually quite looking forward to helping Caleb out. I've never done a race with a proper sprinter, so it'll be nice to have a job to do, and to try to keep it simple."

Holmes is keen to get going, having spent the past few weeks with the team on training camps and in Adelaide waiting for the racing to get under way.

"It's been really good – a good start to sort of help me feel part of the team. It'll be a full month with some of the best guys on the team, as there's some of the Tour de France squad here," Holmes explained, referring to the likes of Ewan, Thomas De Gendt, Roger Kluge and Adam Hansen.

"It's a really good way to integrate with the team, and it's been a good start. Everyone speaks English – the language of the team is English – so that makes things a hell of a lot easier. It's much the same, really, as any other team: it's just riding bikes, but there's a lot more support, and you move a bit faster on this team."