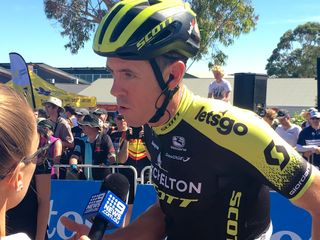 Mat Hayman at his final Tour Down Under as a rider in 2019 (Image credit: Ellis Bacon)

With the Tour Down Under just days away, Cyclingnews sat down with Mat Hayman to pick up the 2016 Paris-Roubaix winner's expert analysis and opinion on the 2020 WorldTour opener.

Hayman retired at the end of last year's Tour Down Under but competed in 12 editions of the race. He helped the likes of Simon Gerrans and Daryl Impey to overall titles, as well as several sprinters take stage wins before he eventually hung up his wheels.

Hayman takes us through every stage of this year's Tour Down Under and highlights the key points at which the race could be won and lost.

Here we also share how to live stream the Tour Down Under, no matter your location, with ExpressVPN.

This is more than just a criterium because it's the first real roll-out for a lot of riders on new teams. For many of the Australians, they've already raced at the national championships, but for the rest of the peloton, a lot of riders will have arrived with new squads and new equipment. For everyone involved it's always good to have this little hit-out before the Tour Down Under starts a couple of days later.

This year it's a slightly different circuit with an extra corner thrown in, but it's just such a fast route that the break, which invariably forms, has very little chance of staying away. I tried last year as I was about to retire, but it didn't really happen because it's just so fast along those wide streets.

I was involved with a few wins there, with Team Sky and Mitchelton, and it's a great feeling to win and start the week with that momentum, so teams with sprinters will be treating this as a really competitive outing.

On paper, this looks like a fairly flat stage, and once again the sprinters' teams will want to control the race. The GC teams will be keeping out of trouble and will be waiting for the next few stages. The sprinters' lead-out trains will be putting all their winter-work into practice, and it could be that one of the more well-oiled machines from the previous years come out on top, simply because they're used to working with each other.

The heat, as throughout the race, is going to be a factor. The southern hemisphere riders will be used to it, and they might have spent most of the off-season in those conditions, whereas some of the Europeans – although they might have been in Australia for some time – might never like it or get used to it. At the end of the day, you're either good in the heat or you're not.

This is one of my favourite stages at the Tour Down Under. I'm a real fan of the finishing circuit in Stirling because it's just a really great stage to ride. The uphill finish isn't super hard, but it shows who has the real form. A sprinter with no form isn't going to be able to get up there, but some of the faster finishers with really solid condition from over the winter will be able to manage it.

Michael Matthews has won there, Caleb Ewan has won there. It's super hard but, more importantly, if you misjudge the finish, you're in trouble because there's a slight downhill and then it ramps up again. You have to get that jump right. For the GC guys, you need to be up there, too, because it's such a long and hard drag. There are going to be some gaps on this stage and we'll start to see who can win the GC at this point. Time bonuses on this day could be really crucial for the overall standings come the end of the week.

When this was previously used, Cadel Evans and Richie Porte were shadowing each other and Rohan Dennis ended up winning. The riders will end the stage by doing laps around Paracombe and it's a brutally hard finish. The difference between here and Stirling is that this will definitely be a stage for the GC riders. The climb to Paracombe isn't as hard as Willunga Hill, and it's shorter, but it's steep and it's going to blow the race apart. If a rider takes 10 seconds here then they're in the box seat for the rest of the race.

A crucial point comes when teams start to position themselves at the front ahead of the final climb to the line. You come down through a valley and turn right at the foot of the climb. Riders can be struggling at the back at that point and expect to drag themselves back into contention as the climb goes on, but that effort will cost you. Bringing this stage back into the race means that it's not all about Willunga.

This looks like another stage for the sprinters. It's the longest stage of the race and we'll see another break go before the sprinters' teams take over. The GC will have taken shape by now and the sprinters who lost out on stage 1 will be looking for revenge. There are a couple of sprints early on during the stage, and the GC teams might take those on as they battle for bonus seconds, but from there the stage should be fairly predictable.

This stage normally involves a hard start getting out of town, and there could be crosswinds again. The finish into Victor Harbor can also be tricky. We've had a few editions of the race where this stage has provided some exposed sections. The climb at the end shouldn't break things up too much. Maybe some of the off-form European sprinters who can't handle the heat might struggle, but overall this should be decided by another bunch sprint.

It's a really tricky finish, though – especially the last kilometre. There are a couple of points where you need to be in the right position if you want to be in the running.

The last corner, which is still a long way from the finish line, is still key. You don't want to be first and you want at least one lead-out rider in front of you. When you nail the lead-out, you can make this one look easy, though. You just don't want things to get too messy.

If you've gone well up Paracombe, then you ought to be pretty confident about Willunga. On so many occasions, the race has come down to the seconds gained and lost here. We've managed to pull it off with Daryl Impey for the last couple of years, but Richie Porte has been the king of Willunga for a number of years. I've almost lost count, but he's not won the race too many times.

He's worked the climb out, though, and what he’s done there is phenomenal. Teammates on that stage are important on the first lap of the climb because there can be a bit of a cross-tailwind but then going into the final ascent you're fine with just one or two riders leading you into the foot of the climb. It's a really important day and this was actually my last pro race. The atmosphere on the climb really emulates the climbs in Europe and it was a great place to end my career.