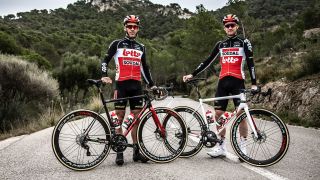 A Belgian WorldTour team with roots stretching back several decades, over the years, Lotto Soudal has been built around sprinters and Classics contenders with few out-and-out Tour de France contenders to speak of. The 2020 line-up follows that path with Caleb Ewan leading the sprint charge and Philippe Gilbert re-signed for the spring Classics.

The 2019 signing of Caleb Ewan from Mitchelton-Scott paid off with the Australian reaching double figures for the season. Ewan's three stage wins at the Tour de France were a landmark moment in his career, while he was consistent enough to pick up victories either side of July.

The rest of the team also chipped in, with Tim Wellens and Thomas De Gendt dovetailing nicely at the Tour. Wellens wore the KOM jersey while De Gendt picked up the second stage win of his career.

The Classics, however, were a major disappointment, and more was probably expected of Victor Campenaerts who claimed the UCI Hour Record and then celebrated by signing a three-year deal with NTT. To be fair, the Belgian did come close to winning both individual time trials at the Giro d'Italia but he still fell short of expectations.

Of course, all of the results and wins were put into context with the tragic loss of Bjorg Lambrecht. The highly regarded and likeable rider was just 22 years old when he died, and how the team conducted itself throughout the rest of the year it was testament to its character. At the team's training camp, John Lelangue paid tribute to Lambrecht, and the team will race with him in their thoughts throughout 2020.

Caleb Ewan: The Australian was arguably the best sprinter of 2019 with wins at the Giro d'Italia and a storming ride at the Tour de France, when the pressure was well and truly on his shoulders. Ewan delivered, and recently signed a contract extension with the team for a further two years. His lead-out looks settled, and, at 25, his best years are ahead of him.

Philippe Gilbert: Hiring a 37-year-old on a three-year deal might be construed as an act of desperation but this is Gilbert we're talking about – one of the most highly decorated Classics riders of his generation and still a formidable force. The Belgian is targeting a complete set of Monuments but a major win of any kind would lift Lotto Soudal immensely. Coincidently the team hasn't won a Monument since he first left the squad back in 2011.

Thomas De Gendt: Is there a rider you'd trust more to win from a break than Thomas De Gendt? A lot depends on the terrain and the make-up of the move but the 33-year-old continues to tally up the wins, even though he's a marked man whenever he moves to the front of the peloton. He won twice in 2019, but his latest penchant appears to be KOM-hunting in stage races. Whatever his objectives are in 2020, he makes those long intermediate stages bearable to watch, and that deserves your admiration.

Tim Wellens: Whether the signing of Gilbert benefits Wellens or not remains to be seen, but the younger Belgian would do well to learn from the experienced master and work alongside him in order to improve Lotto's chances in the spring Classics. Wellens remains a bit of an enigma in that he looks capable of winning major one-day events but seems to win with greater regularity when it comes to stage races.

John Degenkolb: The German came within a whisker of winning Gent-Wevelgem for the second time in his career last season but found himself marginalised at Trek-Segafredo ahead of the Tour de France. A move to Lotto Soudal followed and the former two-time Monument winner already looked settled at the team's December training camp. If the squad can find the Degenkolb of old, then they could have a dangerous trio of Classics leaders with Gilbert and Wellens sitting either side of the versatile sprinter.

Caleb Ewan has established himself as one of the fastest sprinters on the planet, and, with Gilbert recruited for the Classics, this looks like a team that could compete on a number of fronts in 2020.

Carl Fredrik Hagen finished eighth at the Vuelta a España on his Grand Tour debut, but this is a team devoid of a genuine stage-race leader. They have Wellens for anything in the range of a week, as long as there aren't back-to-back mountain stages, but this team isn't set up for three-week GC bids.

With Ewan primed to keep the wins ticking over, Lotto Soudal will be fine in 2020. Gilbert's return will hopefully rejuvenate a team that has consistently missed the mark in the spring Classics, while the Belgian's aura and leadership qualities should be enough to bag a handful of wins during the year. If Gilbert can complete his Monument set then the three-year deal will look like the best bit of business Lotto has done in years.