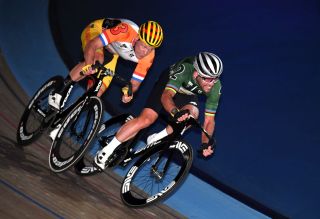 The Netherlands' Wim Stroetinga (left) goes toe-to-toe with British sprinter Mark Cavendish on the final lap of the Elimination Race at the 2019 Six Day London, and it was Stroetinga who managed to come out on top (Image credit: Getty Images)

After a successful opening night for pair no. 2 – Mark Cavendish and Owain Doull – two of the other headline acts at this year's Six Day London, Elia Viviani and Caleb Ewan, showed what they were capable of on day 2 of the event at London's Lee Valley velodrome.

Viviani pipped Doull to the line in the 40-lap Derny race early in the night, and the reigning Olympic omnium champion would go on to win again later that evening in the second Madison Chase with partner Simone Consonni.

"When we did the full attack with 20 laps to go, I was thinking, 'No one can follow us,' and I was surprised when Owain did," Viviani said of his Derny win in a press release.

"My sprinter spirit came out in that moment. We tried to jump the last lap, and, in that race, Michel is the man. I just needed to follow," he said of his Derny motorbike pilot Michel Vaarten, who had helped Cavendish to his own Derny victory on the opening night.

But Cavendish and Doull were soon able to take revenge in the night's first Madison Chase, delighting the crowd by burying themselves to take a lap on the rest of the field to win the event.

However, like Doull earlier in the evening, his partner Cavendish would later just miss out on a win when Dutchman Wim Stroetinga overpowered the 34-year-old crowd favourite for victory in the Elimination Race.

It was then time for Ewan to take his own win in the 7.5km Points Race with some canny racing from the rider who won three stages at his debut Tour de France in July.

"I had a bit of a shocker yesterday," Ewan said, "so I was determined to come on and put on something of a show."

French pair Bryan Coquard and Donavan Grondin retained their overall lead, but are now just three points ahead of Viviani and Consonni, with Cavendish and Doull having moved up to fourth overall, while Ewan and partner Josh Harrison are back in 14th place, but with four nights of racing yet to come.