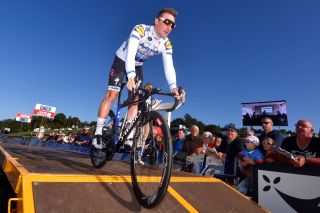 Elia Viviani ended his two seasons with Deceuninck-QuickStep with a runner-up result in the Tacx Pro Classic Saturday in the Netherlands. The Italian sprinter just missed bringing home one more win for the Belgian team in his final race, finishing second to Dylan Groenewegen (Jumbo-Visma).

The Italian's most recent victories came in August, with a string of three wins starting at the RideLondon Classic, then the European championships and the EuroEyes Classic. His final victory for the Belgian team came in September at the Tour of Slovakia.

“It feels a bit strange knowing this was my last race with the team," he said after the Tacx Pro Classic.

"The last two years have been really unbelievable, and I made some big steps forward and entered into another dimension as a rider. I want to thank the squad – everyone from the riders to the mechanics and from the soigneurs to Patrick [Lefevere] – for putting their confidence in me.

Team manager Patrick Lefevere was equally effusive about the rider he signed for thee 2018 and 2019 seasons.

“It has been a real pleasure, for both sides I’m sure, to have Elia on the squad in the last two years," he said. "We built a very nice team around him and he repaid us handsomely, with a lot of beautiful victories in many races, from the Giro to the Tour, and from the nationals to the WorldTour one-day races. Equally important was that he showed professionalism until the very end, late into the season, and this is a thing which means a lot for us, seeing that a great rider is also a great person.”

On Saturday, Deceuninck-QuickStep worked to keep the breakaway at the Tacx Pro Classic in check, bringing the move back before the local circuits with 20km to go and then keeping things under control until the finale.

Florian Senechal dropped Viviani off with 300 metres to go, and the Italian launched his sprint at 200 metres. Viviani didn't quite have enough to hold off Groenewegen, however, and settled for second. It wasn't the ideal send off Viviani had hoped for, but he was satisfied with his two years on the team nonetheless.

"I am happy that I leave so many beautiful things behind me while I take a lot of memories with me after these two extraordinary years," Viviani said. "It’s impossible to name just one special moment, because there was myriad of unforgettable moments that I got to live with the Wolfpack. It’s been an honour to ride for this team and with such an amazing group of guys.”