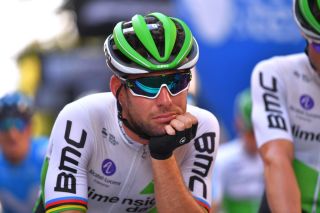 Could McLaren sponsorship at Bahrain-Merida edge Mark Cavendish towards team?

Mark Cavendish's time at Dimension Data is set to end this year, with talks over a move to Bahrain-Merida – set to be called Bahrain-McLaren in 2020 – nearing completion.

According to sources within Bahrain-Merida, no deal has been struck as of yet but the likelihood is that the British rider, 34, will move to the team at the start of next season.

Cavendish was linked with a move to Bahrain-Merida at the start of the current campaign but he eventually signed a one-year extension with Dimension Data.

However, after another disappointing campaign and a strained relationship with team manager Doug Ryder that culminated in the rider missing out on selection for the Tour de France, Cavendish’s time on the South African squad is set to end after four years.

Bahrain-Merida currently have Sonny Colbrelli and Phil Bauhaus as their sprinters and both riders are contracted for 2020, but Cyclingnews understands that the team believe that adding Cavendish would not destabilise the squad. Colbrelli targets hilly races and the semi-Classics for much of the year, while Bauhaus is still developing as a sprinter. The German has not won a race since joining the team.

One source told Cyclingnews that the move would be finalised 'pretty soon' and was 'likely to happen'.

If the move comes off, Cavendish is likely to move on his own, and without his trusted lead-out from Dimension Data. His long-standing lead-out rider Mark Renshaw announced his retirement earlier in the summer, while the future of Bernhard Eisel, now 38, will not include a move to Bahrain-McLaren.

One rider set to join the squad is Wout Poels, who will soon be unveiled as a Bahrain-McLaren rider for next season after turning down the chance to remain at Team Ineos. It's expected that Poels will be given greater responsibility in stage races, while the team have already announced that Mikel Landa will replace Vincenzo Nibali.

The move to Bahrain-McLaren would see Cavendish link up with Rod Ellingworth, the coach who brought him through the ranks in the British Academy, masterminded his World Championships victory in 2011, and guided him during his sole season with Team Sky in 2012.