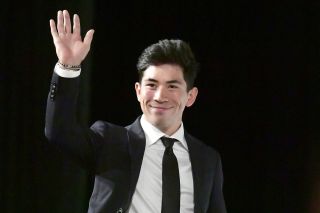 Caleb Ewan (Lotto Soudal), winner of three stages at the 2019 Tour de France, including the final stage on the Champs Elysees in Paris, told Cyclingnews after the official route unveiling today that chances for the sprinters will be limited next year.

"The course looks very tough, but we need to look at all the profiles of all the stages to really see, but at the moment it looks like maybe only three of four sprint chances," he told Cyclingnews' Stephen Farrand after race director Christian Prudhomme unveiled the 2020 parcours in Paris.

In Ewan's maiden Tour de France participation this year – after his former team Mitchelton-Scott unexpectedly left him off the Tour roster in 2018 – the 25-year-old Australian proved himself to be one of the race's fastest finishers, taking his first win during stage 11 in Toulouse ahead of Jumbo-Visma's Dylan Groenewegen.

Ewan struck again on stage 16 in Nimes, this time out-kicking Elia Viviani (Deceuninck-QuickStep), Groenewegen and Peter Sagan (Bora-Hansgrohe). Ewan then plucked the sprinters' ultimate gem, finishing his first Tour with a victory on the Champs Elysees during the final stage in Paris.

It could be quite different in 2020 for Ewan, as opportunities for sprint finishes are limited in a mountainous route that four-time winner Chris Froome (Team Ineos) described as "brutal." Nevertheless, Ewan said the race will once again be a top target.

"We need to see what the Giro course is like as well, but I think even if there aren’t that many chances in the Tour, it’s still the biggest race in the world for us, and I’ll definitely still be going there on my best form, and even if there are just a few opportunities, then I’ll try and take those," he said.

Ewan's first opportunity will be on the opening day in Nice, where a win would also land him in the yellow jersey for the first time. It's certainly a motivator.

"Yeah, for sure, but even that stage is going to be quite tough as well," he said. "I know some of the climbs we’re going to do there. I think it will definitely be a sprint stage; it’s just not going to be as straightforward as a normal flat sprint.

"Yeah, there’s not so many opportunities for us," he lamented again.

Ewan's opportunity to match or beat his mark from last year may be dim in view of the 2020 parcours, but he was able to draw some positive motivation as one of the featured riders at the presentation, watching with the crowd as a highlight reel showed his victories.

He admitted to Cyclingnews that those highlights still give him goosebumps.

"Yeah, it’s always nice to kind of relive some of those memories, but it’s in the past now and now we need to look to next year," he said. "And, like I said, I’ll need to really have a look at the courses and see how many stages I can actually go for."

Indeed, he told Cyclingnews his path to the 2020 Tour has already started.

"I’ve actually just started training again," he said. "I’m doing the London Six Day and then I’ll probably have another small break, and then I’ll be preparing for next season."