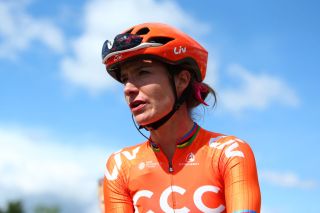 Marianne Vos (CCC-Liv) will race the final round of the Women's WorldTour at the Tour of Guangxi where she is a favourite to win both the race and the overall series title on Tuesday.

"It will be a very challenging race with many differences in altitude. It is an important race for CCC-Liv. On the one hand because we like to show our team to the cycling fans in Asia, and on the other hand because the UCI Women's World Tour classification has not yet been decided," Sports director Jeroen Blijlevens said in a team press release.

The Women's WorldTour series is currently led by Annemiek van Vleuten (Mitchelton-Scott) but only by a mere five points ahead of Vos and 170 to third-placed Lorena Wiebes (Parkhotel-Valkenburg). Neither Van Vleuten nor Wiebes are expected to be racing at Tour of Guangxi.

There will be 200 points awarded to the winner of the one-day race and so it will ultimately decide the overall winner of the 2019 Women’s WorldTour.

"It would be nice if we could take the jersey with Marianne Vos in front of the Asian audience," Blijlevens said. "We must rely on our own strengths. Marianne Vos is doing well, she wants to go for it, Ashleigh Moolman-Pasio is also in great shape.”

The women will race 146km with a start and finish in Guilin. The route is mainly flat, but there are two back-to-back climbs, with the second ascent peaking at the 104km mark, followed by a descent and flat 30km to the finish line.