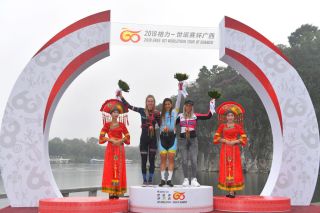 A world-class peloton will travel to China for the final round of the Women’s WorldTour held at the Tour of Guangxi in Guilin on October 22. The series is currently led by Annemiek van Vleuten (Mitchelton-Scott) but only by a mere five points ahead of Marianne Vos (CCC-Liv) and 170 to third-placed Lorena Wiebes (Parkhotel-Valkenburg). The one-day race will ultimately decide and crown the overall winner of the 2019 Women’s WorldTour.

Van Vleuten is not registered to compete in the final event after leading the series for more than half of the season. The versatile Dutch rider has had an outstanding year with victories at Strade Bianche, Liège-Bastogne-Liège and a strong of second places at Amstel Gold Race, Flèche Wallonne and Tour of Flanders. She went on to win her second consecutive Giro Rosa and then culminating her successful season with a victory in the road race at the UCI Road World Championships in Yorkshire in September.

The performances of her Dutch compatriots Vos and Wiebes have been no less impressive. Vos has had one of her best seasons since taking a nearly two-year hiatus from the sport, winning Trofeo Alfredo Binda, Tour de Yorkshire, four stages at the Giro Rosa, La Course by Le Tour de France, Ladies Tour of Norway and Tour de l’Ardeche.

Wiebes is currently leading the UCI World Ranking (ahead of Vos and Van Vleuten, no less) because of her sheer power in the sprints this year. She secured victories at Nokere Koerse, Omloop van Borsele, the opening stage of Tour de Yorkshire, and all three stages and the overall title at Tour of Chongming Island. During the summer racing, she won Diamond Tour, the road race title at the European Games and Dutch National Championships, a stage at BeNe Ladies Tour, RideLondon Classique, and stages at the Ladies Tour of Norway and Boels Ladies Tour.

There are 200 points on the start line in Guilin and so either woman could secure the series overall victory. However, which one of the two will largely depend on their placings in what is expected to be a bunch sprint.

The women will race 146km with a start and finish in Guilin. The route is mainly flat, but there are two back-to-back climbs, with the second ascent peaking at the 104km mark, followed by a descent and flat 40km to the finish line.

Although the third edition of the race is, once again, expected to be a bunch sprint in Guilin, the two climbs could thwart those odds in favour of a breakaway.

The women will race along a flat course and contest the first of two intermediate sprints 38km into the race.

The riders will begin climbing at roughly the 90km mark, a category 3 climb that has an average gradient of six per cent. It is only two kilometres but will set the stage for the longer second climb located just a few kilometre later.

The second climb begins at roughly the 100km mark. It is just 4.3km with an average gradient of 4.4 per cent. This section of the course provides a good opportunity for an attempted breakaway.

The riders will then descend before embarking along a 30km flat run-in to the finish line. On the way, there is the second intermediate sprint at the 126.5km mark.

The race finishes back in Guilin where the winners of the Tour of Guangxi and Women's WorldTour series will be crowned.