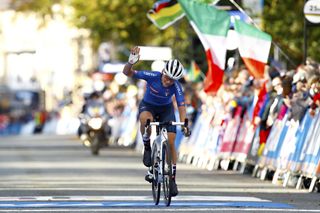 The Italian team were forced to alter their plan to support Tour of Flanders winner Marta Bastianelli in the elite women's road race after Annemiek van Vleuten (Netherlands) made a 100km solo attack over the Lofthouse climb at the World Championships.

The Azzurri quickly turned to Elisa Longo Borghini, who ended up finishing fifth after what she referred to as an 'explosion' among the peloton in Yorkshire.

"Our leader was Marta Bastianelli, but when we were on the Lofthouse the race exploded, and everything changed, and we had to re-evaluate our tactics," Longo Borghini said.

Amanda Spratt: It was survival of the fittest

Dygert Owen: It was gold or bust

The elite women raced 150km on a technical and challenging course that started in Bradford and travelled north before looping back south towards the three laps of the undulating finishing circuit in Harrogate. It was a punchy Classics-style course that many predicted would suit the likes of Bastianelli, Marianne Vos (Netherlands) and Coryn Rivera (USA).

However Van Vleuten defied predictions and turned the race on its head with an audacious attack over the second climb, Lofthouse, at the 45km mark. She raced the remaining 100km alone and soloed to a history-making victory in Harrogate.

"It was a surprise for everyone because Van Vleuten won the race after 100km alone," Bastianelli told Cyclingnews. "It was the biggest surprise for the whole race, and to the peloton.

"Today was an excellent opportunity for me [to win a second world title], but it was a very hard day. It was not an easy race.

"Initially, I thought it was possible to arrive at the finale together because of the wind, and maybe the peloton could have pushed to close the gap. In the end, there wasn't a team [in the main field] that was prepared to do that."

As the chasing riders reached the final circuits in Harrogate, attacks ensued, and several riders were dropped immediately. In the end, Van der Breggen launched an attack with five kilometres to go and soloed to the line to take the silver medal. Spratt wasn't far behind and secured the bronze.

Newly crowned time trial world champion Dygert Owen finished fourth. Longo Borghini was the last of the breakaway to survive ahead of the main field and placed fifth, with Vos winning the field sprint for sixth place.

"The World Championships are always very particular. I'm in good shape right now - it is what it is," Longo Borghini said.

"It was hard on the climb. I had to chase, and it was a chase of survival for me. I'm satisfied with my performance today, and I couldn't have asked more from my body. I'm really tired, and I feel like I gave everything that I could have."