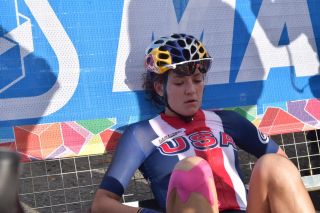 American Chloe Dygert Owen expressed her disappointment after finishing fourth place in the elite women's road race at the UCI Road World Championships in Yorkshire. The 22-year-old was hoping to secure a second rainbow jersey to go along with the world title she won in the time trial earlier in the week.

"When I took off for that last time I knew I wanted to get out front and give myself a shot at the gold," said Dygert Owen. She had attacked a decisive chase group on the Harrogate finishing circuits in an attempt to catch solo breakaway and eventual winner Annemiek van Vleuten from the Netherlands.

"I felt good, and I was hoping I could bring down the gap, but it just wasn't the day. My mentality was to go for gold or bust. I missed the podium today, but I'm happy to have left it all out on the course."

The women raced 150km on a technical and challenging course that started in Bradford and travelled north before looping back south toward the three undulating finishing circuits in Harrogate.

Dygert won double world titles in the junior women's time trial and road race in Richmond in 2015. She has since spent most of her time training and racing on the track where she is a five-time world champion. She competes during the road season for development team Twenty20-Sho Air and has never ridden a race in Europe nor one as long as the elite women's 150km parcours in Yorkshire.

"Going into the race, I wasn't sure what to expect with this not only being my first European road race but also about 20km longer than any race I had done before against the strongest riders in the world," Dygert Owen said.

The Dutch went into the World Championship race with the strongest team, while the US had options to play with Dygert Owen in a breakaway and Coryn Rivera for a sprint final.

Van Vleuten attacked the second of two climbs, Lofthouse, which peaked at roughly 45km into the race. She initially gained 50 seconds, but that pushed out to more than two minutes over the chase group that had formed behind.

Dygert Owen was part of the chase along with was Lizzie Deignan (Great Britain), Elisa Longo Borghini and Soraya Paladin (Italy), Cecilie Uttrup Ludwig (Denmark), Clara Koppenberg (Germany) and Amanda Spratt (Australia). Defending champion Anna van der Breggen was there, too, and sat on the chase group because her teammate was up the road.

Van Vleuten held her advantage around the three finishing circuits and went on to win the world title. Behind, Dygert Owen attacked the chase group and tried to bridge to Van Vleuten. She initially closed down some of the gap and looked to be at least racing for the silver medal. But the unfamiliar distance of the race began to take its effect, and Dygert Owen's legs gave out. She eventually faded, was caught by van der Breggen and Spratt and finished fourth.

"Yeah, it was definitely necessary," Dygert Owen said of her late-race move. "It was the right time to attack, I thought I could do it, but my body just gave out. I took my shot and went as hard as I could. I am disappointed I didn't get the result I had hoped, but my legs didn't have it today. It was a very hard race, and I gave it all I had."