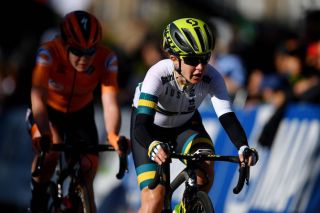 Australia's Amanda Spratt secured a bronze medal, behind Dutch duo Annemiek van Vleuten and Anna van der Breggen, in the elite women's road race at the UCI Road World Championships in Yorkshire on Saturday. Spratt was aiming to bring her nation its first world title in the women's road race but will now look to next year's more mountainous parcours as a chance to win the rainbow jersey.

Dygert Owen: It was gold or bust at the World Championships

"I came here and wanted to win, but no one was beating Annemiek today," Spratt said. "Sometimes you have to realise when someone has had an exceptional performance, and I don't think I could have changed the outcome to become the world champion today. My career is not done yet and I'm hungry for more. I've had a look at next year's course and I think that will be an exciting one. We will move forward and I'lll see what I can improve on."

Earlier this week, the UCI unveiled details of next year's Road World Championships that will be held in the Vaud and Valais cantons of Switzerland. The road race will include the climb of the Côte de la Petite Forclaz, just outside the city of Martigny, which is four kilometres long, with an average gradient of 10.2 per cent, and a maximum of 14.5 per cent, mid-way up the climb, and which has 478 metres of elevation, topping out at 909m. The climb will feature mid-way through each 20km finishing circuit raced three times by the elite women, who will race a total of 123km.

In Yorkshire, the women raced 150km on a technical and challenging course that started in Bradford and travelled north before looping back south towards the three undulating finishing circuits in Harrogate. Van Vleuten attacked over the second climb at the 45km mark and soloed more than 100km to victory.

"The attack didn't surprise me," Spratt said. "She's in such good shape and wants to use those legs. The luxury of the Dutch team was how strong they are. They could send off Annemiek and they had Anna who could sit behind. It was the perfect scenario for them. You never know how committed the group was behind. She was on another level today."

"Initially we were working, but the closer we got to the circuits, the more we started looking at each other and attack," Spratt said. "I chose to not participate in the attacks, and follow and save my energy, which was a smarter move at that point. You only had so many bullets to fire on a circuit like this, and had to be careful how you used them.

"It was a hard and brutal race – probably the hardest I've ever ridden. I had cramps everywhere; even my thumb was cramping in the end. Everyone finished so empty. The race opened up after 45km, and it was 100km of full-gas racing that we don't get to see all the time. It was a tough race.

"I finished absolutely empty and there's not a lot I could have changed. I'm happy for this bronze medal and thankful to my team for supporting me," she said.