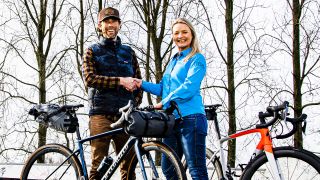 After trading a road bike for a gravel bike, Laurens Ten Dam will be using Pro components for his gravel racing calender in 2020. He has chosen to target a number of key events this year including the technical Grasshopper series, Dutch National Beachrace, US gravel classics Dirty Kanza, Leadville and the Belgian Waffle Ride, plus his own gravel doubleheader LTD Gravel Fest and Gravel Raid in the Netherlands.

Pro will be kitting Ten Dam’s gravel bike out with stems and on-bike storage from their Discover range, Pro's Tharsis range for his mountain bikes, and should he venture onto tarmac he will use Pro's Vibe range.

Ten Dam will have the choice of saddles from the Pro Stealth range and will run either the Superlight version or the Stealth off-road models. Any pre-race preparations or bike maintenance will be carried out with Pro's workshop tools and accessories.

Ten Dam: "During my career I was lucky enough to experience loads of different components through various team sponsors. So I know what works well and what doesn't. Now I'm free to choose, I want the highest quality from a brand I know and trust as well as a range to suit the road, gravel and MTB projects I'm involved in. PRO was the natural choice."

At the end of 2019, the Dutch rider decided to end his 17 year career as a professional road rider which saw him ride for the likes of Sunweb and CCC team and achieve two notable top 10 finishes at Grand Tours – taking eighth overall at the Vuelta a España in 2012 and ninth at the Tour de France in 2014. Ten Dam has now moved his focus to the blossoming gravel and adventure racing scene. The 39-year-old is no stranger to gravel and has been racing off-road in his off-seasons since 2016. He also isn't the only WorldTour rider in the pursuit of a more adventurous form of racing, since his announcement he has been joined at the gravel start line by the likes of Ian Boswell and fellow Pro-sponsored athlete Peter Stetina. Ten Dam kicked off his 2020 season with a 5th at Low Gap Grasshopper Adventure Series.

Since committing to the gravel scene, Ten Dam has launched his Live Slow Ride Fast project, a clothing company, podcast and race team. The team consists of Ten Dam plus fellow riders and LSRF podcast regulars Stefan Bolt and Dennis Bruin. Pro has extended its support beyond Ten Dam to include the whole Live Slow Ride Fast team.

Alexa Cunningham, Pro Marketing Manager: “We’re thrilled to create this project with Laurens and the Live Slow Ride Fast team. Through his heroics in the Pro ranks, Laurens has real international kudos and recognition and now with his gravel programme, along with fellow Pro ambassador Pete Stetina, he’s at the forefront of an exciting and fun adventure-driven chapter. We look forward to working with Laurens on product developments in the future, especially now that he has provided us with the perfect platform to communicate our brand message of creating a better sports bicycle experience for riders, whether on gravel, road or mountain bikes.”