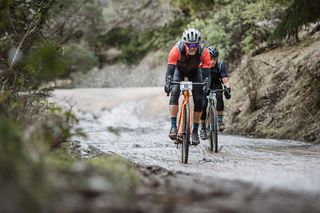 On the men’s side, Geoff Kabush, Peter Stetina, Laurens ten Dam and Jonathan Baker make up an equally impressive group of competitors.

The 68-kilometre (43-mile) event comprises of over 5,500-feet of climbing and sees competitors take on a mix of gravel and road.

The cyclo-cross vs gravel bike conundrum: understanding the differences

In the days leading up to the first race in the series, Cyclingnews spoke to race organizer Miguel Crawford, who explained how and why the Grasshopper Series had become a success.

"The uniqueness of the Hoppers comes from many things. For one, we have been doing this for 22 years and there have always had between four and seven races per season. This means our group of riders get together multiple times throughout the year. It truly has a "family" feel.

"Secondly, the riders who come out embody the best possible elements of competition. They are seasoned riders and self-sufficient. They are looking for adventures that challenge the body, mind, and machine. They look out for each other and have great sportsmanship on and off the bike."

According to Crawford one of the biggest challenges facing the riders in the event is race equipment.

Gravel racing has seen significant growth in the last few years. Ten dam, who retired from professional cycling at the end of last year included the Grasshopper Series as one of the five-races that changed his life. He now runs his own gravel race.

"It's the most beautiful place in the world to ride your bike but right from the start people were sprinting," ten Dam said of the Grasshopper Series.

"I thought, 'Fuck, I better start sprinting too' and then all of a sudden you're climbing and then going through farm gates with your bike on your shoulders. Then you have to cross rivers and soon enough there are just 15 riders left, then 5 and I ended up fourth.”

Stetina has taken a similar path to ten Dam, retiring from road racing at the end of 2019 and instead choosing to race a number of key gravel races in North America.

There are seven races in the Grasshopper Series, with the final one coming in June.