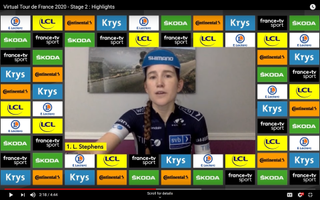 When Lauren Stephens first got on Zwift, she had to swallow her pride. Unlike on the road where she could show the local women a thing or two and go toe-to-toe with many of the men, she found herself struggling to keep up with riders she'd never seen race outside. Now, at level 29 and about to earn the coveted 'Tron bike' Stephens has become so proficient in the game that she has helped her TIBCO-Silicon Valley Bank team move into the lead of the Virtual Tour de France after winning stage 2.

Stephens tells Cyclingnews that the Virtual Tour is the 'real deal'.

"I know it's virtual but it's pretty incredible to win a stage of the Tour de France," Stephens says from her home in Dallas, Texas, fresh off the trainer where she was competing in yet another Zwift race - this one just for fun and to move into the number 1 slot on the ZwiftPower rankings. "It's being put on by the ASO. It's the real deal. I think most of the girls who are racing it are taking it seriously. For the team to win something like that and have Kristen [Faulkner] second the day before. We get to select one rider to wear the yellow jersey, and we'll actually have the yellow and the green jersey on Saturday so it's pretty exciting."

Her rapid rise through the Zwift ranks, Stephens says, came from studying how the game works, embracing it as a training tool and viewing it as a completely different discipline to road racing. "It's like a mountain biker deciding to go race road or a road cyclist going to race mountain bike. For sure, we take some of the skills and the knowledge we have from our own disciplines, but then you have to embrace that it's a new discipline," she says.

"The biggest difference is you can't tell how your competitors are feeling. You can't see when they're about to slow down or when they're about to attack. On the road, you can see those gestures that indicate how a rider is feeling. [In Zwift] you can use 'fan view' and check heart rates and things like that, but it's not the same as racing on the road. I think once you accept that, then it really helps."

Once a rider has risen through the professional ranks they come to expect that lower-ranked riders will treat them with respect and demur to them in the peloton. But on Zwift the culture is different - there are no elbows or hooks to throw, only watts per kilogram, PowerUps and the perfect trainer setup. "I think a lot of professional cyclists have a hard time with it because you're really putting yourself out there," Stephens says. "It's like a professional going to do a local race. When a professional goes to a local race, they're expected to win, they're expected to do well, which puts a lot more pressure on that rider.

"I had to put that aside. I wasn't winning the races at first and I had to be open to being so transparent, to being vulnerable, I guess. Girls beat me that have never even raced on the road in real life. It was like, 'what is going on?' Their heart rate was only this and my heart rate was that..."

Not only were they strong, but Stephens was also struck by the cultural difference - with riders cheering each other on and reacting badly to the kind of banter you normally see in road racing. "On the road, when we're on the bike we're vicious - we're not friends. As soon as we step off the bike it's a totally different world, but I was getting a little pushback from the women on Zwift for being a little - not aggressive, but like in the chatbox saying things like 'are you going to chase that down?' - things we would say to each other on the road that is no big deal. But they were like 'what? This is not cool!' Now like I've started doing like some meet up rides to show the girls that I am fun and nice, but when I'm racing, I'm racing.

"You find that on the local scene, too. If a girl is competitive, then they're mean, but if guys are competitive it's normal. When we get to the professional level it's normal but at a more local level you don't see that as much, and I think that's where the Zwift community was at.  I think it's been neat for them to see that we can have both sides - we can have the competitive-racing-each-other side and then we can go ride on group rides together and chat and have fun."

In addition to learning a new form of racing while staying in shape, Stephens and her teammates have been able to maintain their strong relationships with longtime sponsors TIBCO and Silicon Valley Bank and equipment partners Cannondale and Shimano.

"It's been cool with Cannondale, we have the bike in the game with the Shimano parts on the bike. We also have a group ride on Wednesday morning called the Midweek Motivation Ride, when the riders come to that ride they get put on the SuperSix Evo Cannondale. It's been neat, and having the [team] jersey in the game was a really big deal. Since we're professional we get to keep our jersey on.

"I feel like we've created another source of fans. If people hadn't heard of our team before and we won the Tour for All and now we're doing well in the Virtual Tour de France. It's creating a whole other market for fans."

It has helped Stephens that her husband Matt is also into Zwift, they race together regularly, setting up in their living room with side-by-side televisions, three fans and a dehumidifier to stay cool. Because Texas is one of the hardest-hit states in the coronavirus pandemic, they are only going out once a week to get groceries, living 'like little hermits'.

Stephens hopes to throw off the hermit lifestyle and get to Italy for Strade Bianche on August 1 - one of her main goals before the season began - and get some results. USA Cycling selected her for the long team for the Olympic Games in Tokyo, rescheduled for 2021, and she's hoping to show that she deserves a spot on the team.

"That's the main goal of getting back over to Europe and getting as many UCI points as I can and hopefully get a result at one of the WorldTour races," Stephens says. "I definitely feel like I deserve a spot on that team and I guess in a way COVID could probably be kind of a blessing for me that it puts me back on an even playing field with my competitors. Where not having as strong of a season in 2018 and 2019 put me on the back foot of trying to make the team. Where now, I think it's an even playing field coming out of COVID."

Stephens crashed in the last stage of the 2018 Santos Tour Down Under, suffering a soft-tissue injury to her hip that has kept her from her best performances through most of that year and 2019. After a lot of physical therapy exercises and treatments, she finally started coming around toward the end of 2019 - battling Marianne Vos for a stage at the Tour Cycliste Féminin International de l'Ardèche and ending the race in the top 10 overall. She was back in the mix in the Tour Down Under earlier this year, taking two stage podiums and finishing fourth overall and finally feels like she's back to her best.

"At the end of last season I was I'd say like 90 per cent. And then at Tour Down Under, I would still have a couple of bad days but in the past month, I can't say that I've had any pain in my hip.

"It's exciting - my power is back to the power I was doing back in 2017. I'm definitely ready to get back out there and show that I'm back to the rider that I know I can be."